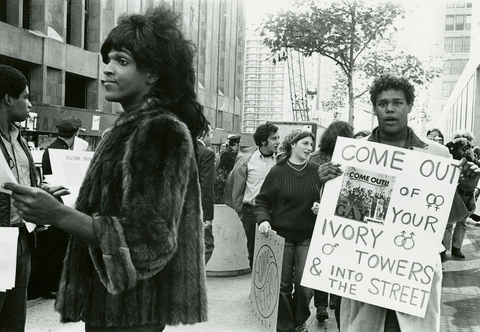 Marsha P. Johnson (l) handing out flyers in support of gay students at New York University in 1970. Photo by Diana Davies/NYPL-Handout/Reuters via CNN

Nearly three thousand people say they want a statue of Christopher Columbus in Elizabeth, New Jersey, removed. But that's not all -- they want it replaced with one of Marsha P. Johnson, a tribute they say has been a long time coming.

"I've always said that Marsha was more recognized in New York City and around the world than she is in her own hometown," her nephew, Al Michaels, says.

Johnson, a pioneering trans-rights activist and one of the central figures in New York City's gay liberation movement from the 1960s through the 1980s, was born and raised in Elizabeth and left in her late teens with nothing but a few dollars to her name.

She leaves behind both a legacy of kindness and perseverance. Despite the slew of challenges she had to overcome as a Black, transgender person, those who knew her say Johnson was defined by the confidence in who she was, the compassion and care she showed others, and her vibrant personality -- often translating into colorful headpieces and dashing outfits.

Last year, New York City Mayor Bill de Blasio announced the city would commemorate both the work of Johnson and her friend and activist Sylvia Rivera with statues in Greenwich Village. Their monument will be among the first in the world to honor transgender people, the mayor's office had said.

Michaels says it was a pleasant surprise when he saw a petition calling for the change in statues in Elizabeth. He's one of the more than 2,900 people who have signed in about a week. He says he's even more thrilled the movement has started with such a young crowd.

That petition was created by 19-year-old Celine Da Silva, who also grew up in Elizabeth and says she's been familiar with Johnson for years. The activist long remained part of the conversations among the city's LGBTQ community, Da Silva says, but she only recently found out Johnson was from Elizabeth.

Inspired by the reignited Black Lives Matter movement across the country in recent weeks and the tearing down of more monuments reminiscent of brutal parts of US history, Da Silva says she felt it was time the city began trekking in the same direction.

"There was an overwhelming amount of positive support," she says. "It tells me that times are changing. People are becoming more accepting to people who identify as LGBT. It tells me that people are realizing how whitewashed our history is and how some figures that we learn about, we don't learn everything about them."

Earlier this month, two other New Jersey communities moved to take down memorials to Christopher Columbus. The mayor of Camden announced the removal of a Christopher Columbus statue saying in a statement its "presence has long pained the residents of the community." And in West Orange, the mayor said a Columbus monument would also be coming down, adding celebrations of Columbus' life are "divisive and a symbol of hate and oppression and cannot remain as part of our community."

Both communities say they are working to determine what they can erect as replacements.

Da Silva says she wants her community and other communities across the US to be celebrating more minorities and more "people who are different from us."

"And I think that the LGBT and queer community should be able to learn more about historic figures from their own community," she says.

The four young people CNN spoke with working to create change in their hometown of Elizabeth all expressed disappointment in not learning as much about figures like Johnson.

Carter Muelle, who also helped create the petition, says schools perhaps don't know how to approach those issues. Muelle told CNN they conducted their own research after learning about Johnson.

They describe Johnson as a "legend" for the LGBTQ community.

"Black trans women are the most ignored and the most disrespected people, in my opinion, out of anyone," Muelle said. "So I feel just her being a statue here will give hope to a lot of younger people, for sure, a lot of LGBT youth."

50 strangers at the door

It's hardly difficult to see why the crowd behind this movement is so passionate about honoring Johnson.

Those who knew Johnson say to know her was to love her. And for those who didn't like her, well she had her middle initial to use as her response: P -- for 'Pay it no mind.'

Michaels says he has memories of Johnson from his childhood, when the activist would often return to her family home in Elizabeth for the holidays. She had almost always given all the clothes her parents and siblings provided her to people she would say needed them more. And she'd almost always show up to the door accompanied by a crowd.

"She would bring them home and there'd be 50 strangers at my grandmother's door with Marsha," he says. "Sometimes they'd be there for the whole week.

"I'm telling you, I never knew these people and you would think they were really, really family because they stayed like family."

One of those friends: Randy Wicker, whose Hoboken, New Jersey, apartment was often Johnson's home as well.

Wicker, now 82, was initially hesitant of Johnson, who often worked as a prostitute and would sometimes end up in jail as a result. The two had very different approaches as well: both activists for LGBTQ rights, he would often sport a suit while Johnson opted for colorful dresses and, more often than not, bright red lipstick.

By the end of her life the two had become like family, he says. Johnson's body was found in the Hudson River in 1992 and the circumstances of her death are still unclear. New York police ruled the death a suicide and didn't investigate. Her case was later reopened and remains undetermined.

The challenges she faced -- taking to the streets for an income, battling mental illness and sometimes homelessness -- meant she never criticized people who were down and instead worked to help them overcome their own battles, Wicker says.

"She found importance in helping others," he says. "She realized that -- well, we say it but we don't really practice it -- and that is: so many things are more important than money."

And the community caught on, today often referring to her as a saint-like figure. After she passed, Wicker says he remembers reading a tribute for Johnson, which was accompanied by her photo. Over her head was a halo.

Not a question, but a demand

Da Silva, who created the petition, and her boyfriend, Daniel Cano, plan on bringing up their request to the city council.

The effort is just one of several steps the city's young residents have taken to create a more inclusive Elizabeth.

In recent weeks, a new organization has begun forming -- the People's Committee of Elizabeth -- which is meant to elevate the city's Black community, the group's co-founder, 22-year-old Priscilla Gaona.

"We basically say we have to amplify the voices of the most affected and vulnerable in our city which is the Black community," Gaona, who backs the petition, said. "Any figure that is rooted in colonialism or white supremacy, that degrades what our goal is."

On Saturday, the group also plans to host a Pride march, Gaona says.

Cano, who helped with the petition's creation and has been pushing for support on social media, says he hopes this move is only the first step in transforming their community.

"Obviously we're not asking the city council to consider putting up a statue," he says. "This is a demand."

"Ultimately, a statue is going to come up no matter what. And we're going to honor Marsha in the way that she deserves to be honored."