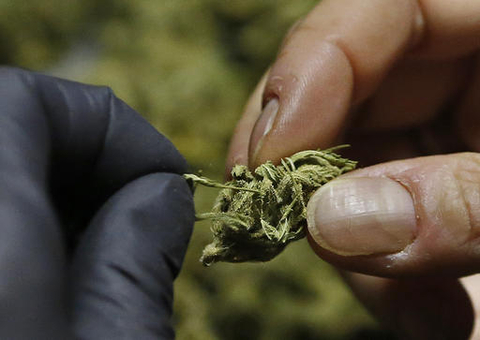 LITTLE ROCK, Ark. (AP) — The Arkansas Supreme Court has disqualified a medical marijuana proposal from the November ballot less than two weeks before the election and with thousands of votes already cast, but voters will still be able to consider a competing plan.

In a 5-2 ruling Thursday, the court sided with opponents of the proposed initiated act — known as Issue 7 — that would have allowed patients with certain medical conditions and a doctor's recommendation to purchase marijuana from dispensaries. The proposal was one of two medical marijuana proposals on the ballot, and justices earlier this month rejected a challenge to a competing measure.

The ruling comes after nearly 142,000 people have already cast ballots through early voting, which began Monday in Arkansas for the general election.

Justices tossed out more than 12,000 signatures that were approved by election officials for the proposal, saying supporters didn't comply with laws regarding registration and reporting of paid canvassers. The decision left the group nearly 2,500 signatures shy of what was needed to qualify for the ballot.

The head of Arkansans for Compassionate Care, the group behind the measure, did not have an immediate comment on the decision.

Two justices disagreed with the opinion, noting that a retired judge assigned by the court to review the petitions had said more than enough valid signatures were submitted.

"The people should be permitted to vote on the initiative on November 8, and their votes should be counted," Interim Chief Justice Howard Brill wrote in the dissenting opinion.

Both measures called for allowing patients with certain medical conditions to buy the drug, but they differed in their restrictions and regulations. For example, the proposal struck down Thursday would have allowed patients to grow their own marijuana if they didn't live near a dispensary. Arkansans United for Medical Marijuana last week began airing TV ads statewide in favor of its proposal, Issue 6.

Arkansas voters narrowly rejected a medical marijuana proposal four years ago despite national groups spending big in favor of legalization. National support for medical marijuana has grown since then, and half of U.S. states and the District of Columbia have legalized the drug in some fashion.

But the medical marijuana push faces more obstacles this year in Arkansas. Republican Gov. Asa Hutchinson, who headed the U.S. Drug Enforcement Administration, has spoken out against the measures. A coalition of the state's most powerful lobbying groups — including the state Chamber of Commerce and the Arkansas Farm Bureau — have been campaigning against them. A Republican lawmaker has said he'll propose legislation next year legalizing a limited strain of the drug for some patients if voters reject legalizing medical marijuana next month.

State Surgeon General Greg Bledsoe, a spokesman for the anti-medical pot coalition, said the ruling doesn't change the group's strategy and that he was concerned about the court striking a ballot measure so close to the election. The court earlier rejected separate lawsuits by the coalition against both proposals, but those challenges focused on the proposals' language and not its petitions.

"Honestly, at this point in the stage, 12 days before the election, it sounds kind of strange, but I actually kind of wish it would have gone to the voters and let them vote it up or down at this point," Bledsoe said.

The state Democratic Party's platform includes general support for legalizing medical marijuana, but the platform is silent on the two ballot measures. The state's Democratic nominee for the U.S. Senate, former federal prosecutor Conner Eldridge, has said he supports developing a "responsible" medical marijuana program nationally and in Arkansas, though he isn't weighing in on the specific proposals.