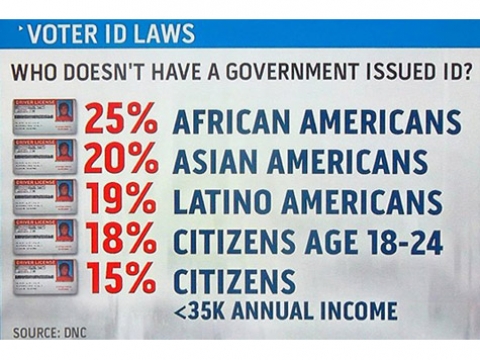 The Republican-led state House voted 52-45, largely along party lines, to complete an override that started in the GOP-controlled Senate on a 21-12 vote last week. Only a simple majority was needed in each chamber.

"We are trying to protect the integrity of one of the most fundamental rights we have here in America," said state Rep. Stephen Meeks, a Republican from Greenbrier and the bill's House sponsor. House Speaker Davy Carter, a Cabot Republican who did not vote for the bill when it passed the House last month, supported the override.

The governor, who last week called the bill "an expensive solution in search of a problem," told reporters earlier Monday he had talked with some lawmakers to explain his veto, but had not urged them to vote against an override.

"He made his case as to why he thought it wasn't going to be good for Arkansas, but they have the final say and they've had that say," Beebe spokesman Matt DeCample said after the vote.

Rep. John Walker, a Little Rock Democrat and noted civil rights lawyer, warned lawmakers to "not go back on history" by enacting the requirement. Critics of such voter ID laws say the type of in-person voter fraud they are meant to prevent is extremely rare, and that the laws are really designed to make it harder to vote for certain groups that tend to back Democrats, including minorities, students and the elderly. Black lawmakers in Arkansas have compared the new voter ID law to poll taxes used in the Jim Crow era.

"I dare say you'll find any of your colleagues in this body of my color who will support this. It doesn't matter what their leanings are. What you're doing in effect is saying we don't care about what you think, we're going to do this anyway," said Rep. John Walker, D-Little Rock, who is black. "If you have the majority of course that's what you can do, but do you really uniformly to a person by party disrespect us so much?"

One Democrat, Rep. Fred Love of Little Rock, was listed as voting for the override, but he later indicated he would likely file a letter with the House clerk stating that he intended to vote the other way. Love chairs the legislative black caucus.

Sen. Bryan King, who sponsored the bill in the Senate, said after Monday's vote that he was relieved by the results.

"This bill has had the most debate about it, it's had the most scrutiny of any bill this session," the Republican from Green Forest said. "It's going to become the law of the land here in Arkansas, and that's a great thing. An overwhelming majority of Arkansans support it."

The new law will require Arkansas to provide a free photo ID to voters who don't have one and will cost the state an estimated $300,000. The requirement won't take effect until there is funding for the IDs or until January, whichever occurs last.

While Arkansas poll workers must ask for identification under current law, voters don't have to show it to cast a ballot. Under the new law, voters who don't show photo identification can cast provisional ballots. Those ballots would be counted only if voters provide ID to county election officials or, before noon on the Monday following an election, sign an affidavit stating they are indigent or have a religious objection to being photographed.

Arkansas is among 19 states where proposals to enact voter ID laws or strengthen existing requirements have been introduced this year, according to the National Conference of State Legislatures.

Republicans have been pushing for similar laws in other states, although the measures have faced court challenges. Voter ID laws in Wisconsin and Pennsylvania have been blocked. Similar restrictions by Texas and South Carolina have been rejected by the federal government under the Voting Rights Act, and Mississippi is waiting for federal approval of its photo ID law.

Arkansas Republicans had pushed for voter ID requirements for years, but the measure failed to reach the governor's desk under Democratic majorities. Republicans last November won control of the Legislature for the first time in 138 years and have enjoyed a number of successes, including the passage of stricter anti-abortion laws and broader gun rights.