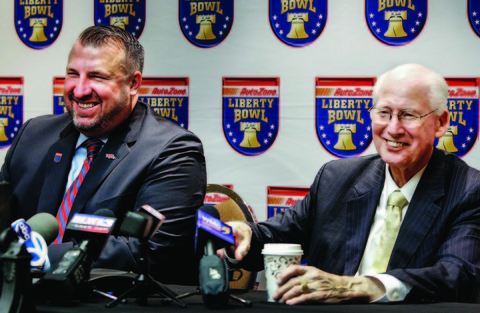 MEMPHIS, Tenn. (AP) — Kansas State coach Bill Snyder would rather not match up against a former colleague. Arkansas' Bret Bielema doesn't mind it nearly as much.

The friends meet as opposing head coaches for the first time Saturday when Arkansas (7-5) squares off against Kansas State (6-6) in the Liberty Bowl. Bielema worked as an assistant on Snyder's Kansas State staff from 2002-03.

"It's not my favorite thing to do, to play against or compete against coaches that have been through our program," Snyder said. "It's not for the reason that maybe they know something you don't want them to know. It's the human element of it more than anything else."

Bielema has more trouble competing against a former colleague on the recruiting trail than the playing field.

"You lose a lot more friends recruiting than you do on game day," Bielema said.

Kansas State and Arkansas got to this point by rallying late after nearly playing their way out of postseason contention.

Arkansas, ranked 18th at the start of the season, lost three of its first four games and was 2-4 halfway through the year. The Razorbacks (7-5) now have a chance to end their season with six wins in their last seven.

"After how we started, it would be a great finish to our season," quarterback Brandon Allen said. "Coach (offensive coordinator Dan Enos) is always saying we're not a 7-5 team. We should be an eight-win team right now, if not more. All we can do is try to be an eight-win team. That's our goal."

Kansas State dropped six straight games midway through the season and appeared destined for a seventh straight defeat when it trailed Iowa State 35-14 in the third quarter.

The Wildcats rallied to beat the Cyclones 38-35 to start a three-game winning streak that made them bowl eligible.

Here are some other things to watch in the Liberty Bowl.

K-STATE'S QB COMBO: Although Joe Hubener was Kansas State's starting quarterback for each of the Wildcats' last 11 regular-season games, there's no guarantee he takes the first snap Saturday. Snyder isn't saying whether Hubener or Kody Cook will get the start. Cook also is a receiver who ranks second on the team in yards receiving (412) and is tied for second on the team in catches (27).

MISSING PITTMAN: Arkansas' starting offensive linemen average 327.6 pounds per man, more than any other offensive line in a Power 5 conference or even in the NFL. But that big line is missing its leader. Offensive line coach Sam Pittman left after the regular season to take the same position at Georgia. Eric Mateos, who worked as a graduate assistant this season, has been coaching the offensive line in bowl preparation. "Coach Pittman is the best coach I've ever had in my life, hands down," Arkansas guard Sebastian Tretola said. "But at the same time, he's so good, he's built a foundation, a smooth-running, well-oiled machine that can run with or without him."

WILDCATS' BIG RETURNER: Kansas State's Morgan Burns has scored touchdowns on four kickoff returns this season. If he does it a fifth time Saturday, he would tie the Football Bowl Subdivision single-season record held by Ashlan Davis, who scored on five kickoff returns for Tulsa in 2004.

SELLOUT CROWD: Liberty Bowl officials have declared Saturday's game a sellout. This marks the Liberty Bowl's first sellout since Arkansas' 20-17 overtime victory against East Carolina on Jan. 2, 2010. Liberty Bowl Memorial Stadium is only about 7 miles from the Arkansas border.

SNYDER'S FUTURE: The 76-year-old Snyder says he will decide after the season whether he will return next fall. Snyder initially retired as Kansas State's coach after the 2005 season, only to return in 2009. He wants to make sure he includes his family in the decision-making process. "The first time, I wasn't as inclusive as I needed to be in regard to my family," Snyder said. "Since that time, I've said every year we'll sit down and talk about it as a family. They'll certainly have their thoughts. But I don't have time to do that during the course of the season."

This story has been corrected to show Arkansas has a chance to win six of its last seven games, rather than seven of its last eight.