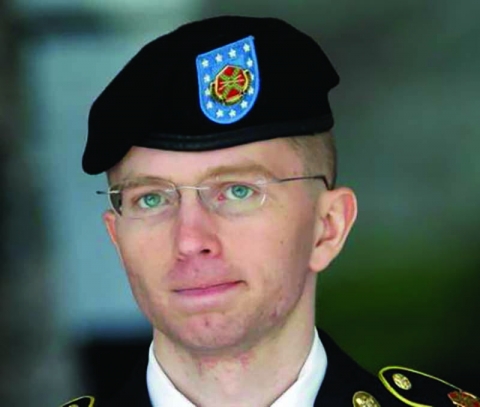 Manning is being withheld treatment for gender dysphoria. AP photo.

NEW YORK – The Department of Justice has filed a brief in Chelsea Manning's case against the United States government challenging her request to grow her hair beyond the two inches allowed by military regulation.

Chelsea Manning is currently serving a 35-year prison sentence at the United States Disciplinary Barracks at Ft. Leavenworth, Kansas. In September 2015, military officials again denied her repeated requests to be treated as female for purposes of hair length and hair grooming regulations, a recommended part of her treatment for gender dysphoria.

The government's brief argues that withholding this treatment is for Chelsea's own good to protect her from alleged assaults if she is permitted to further feminize in accordance with her medical needs.

The following comment can be attributed to Chelsea Manning:

"I believe that defining ourselves in our own terms and in our own languages is one of the most powerful and important rights that we have as human beings. Presenting myself in the gender that I am is about my right to exist. What the government is basically telling me is 'you cannot exist,' that 'you are wrong,' and that 'you do not exist.' What they are doing is taking away our right to exist. I think this is the kind of situation that justifies all kinds of terrible things like ignorance, maltreatment, torture, murder, and genocide.

"Nobody knows your gender more than you do. No—one. You do not know my gender better than I do. A doctor doesn't know it better than me. My parents don't know it better than me. No one experiences my gender in the way that I experience it. Gender presentation should reflect the person that you are. When you lose control of your gender presentation you lose an important aspect of your identity and existence."

The following comment can be attributed to Chase Strangio, Chelsea Manning's Lawyer in the ACLU's Lesbian, Gay, Bisexual, and Transgender Project:

"The government is attempting to complicate and diminish Chelsea's core constitutional rights to be treated equally and to be free from cruel and unusual punishment. Chelsea's demand is simple: that she be treated with her medically necessary treatment and like all other women in military custody. Her fight is central to the pursuit for justice for transgender people and for those who are incarcerated and we are honored to fight alongside her."

The government's brief is available at:
https://www.aclu.org/legal-document/manning-v-carter-defendants-memorandum-support-motion-dismiss