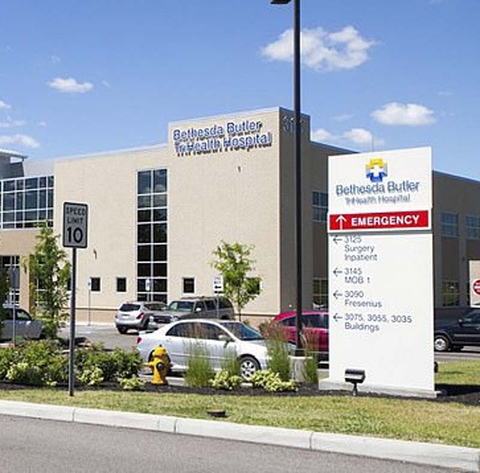 A TriHealth emergency room nurse was placed on administrative leave Monday after launching into a profane, anti-gay tirade on Facebook, writing in part that “this country has gone to complete ****” and “these ****ing ****-sucking h**** think they deserve everything.”

The catalyst? A recent decision by Procter & Gamble-owned Always, which manufactures menstrual products, to remove the feminine Venus symbol from its pad packaging. The change arrived after a social media campaign by transgender customers, who wrote to the brand requesting that it remove the symbol to avoid alienating transgender men and nonbinary people with periods.

The nurse posted multiple times in response. In two comments screenshotted by City Councilman Chris Seelbach, she wrote she did not believe in the existence of transgender people, that entitled gay men and “confused woman” were ruining the country, and that “Men need to be men. Women need to be women.”

Tristan Vaught, a nonbinary activist involved in advancing transgender acceptance through the Living With Change Foundation, said the comments were upsetting but not surprising.

Cases of healthcare professionals who judge, mistreat or refuse to see transgender patients are common enough to make national news and some Department of Justice victim interaction guidelines, which make a similar point to Vaught’s: Fear of judgment and mistreatment can keep transgender people from seeking care even when they are victims of violent or sexual crimes.

Seelbach, who is gay, called for a boycott of TriHealth in response to the nurse’s comments.

"Nurses should be able to treat anyone regardless of our differences, and having such extreme views and being able to put them out there publicly would make a lot of us apprehensive of wanting a nurse to treat us,” he said. “I would not feel comfortable going to TriHealth knowing that this woman could treat me as a nurse."

“I know some wonderful people that work there,” they said. “I’ve been in talks with their diversity committee. I don’t think, as an organization, this is what they stand for.”

Instead, Vaught called for more comprehensive employee education and for TriHealth to make it clear that homophobia and transphobia are not part of their values as an organization.

“I think everyone can be trained to be respectful,” Vaught said. “I don’t think that you’re going to change hearts and minds. I think you can teach people, while they’re on the job, while they’re clocked in, ‘This is the culture that we’re going to have.’”

Education is prominent in the central mission of Vaught’s employer, the Living With Change foundation. Its founders, Pure Romance CEO Chris Cicchinelli and wife Jessica, launched the project after learning their daughter was transgender.

But before that, they considered moving somewhere she would be safer from transphobia.

"We thought about leaving and going to Chicago, New York, L.A., to what I would call a more open community,” Chris Cicchinelli said.

They decided to stay, hoping to create a more accepting culture toward transgender people like their daughter in the city they already called home.

Cicchinelli agreed more needed to happen in order to ensure transgender people can be treated with respect and dignity when seeking medical care.

“We need to make sure that when you're going to the hospital, you feel safe,” he said. “You feel like you can be given the proper care and you're not worried about what people are thinking."

Hopefully, he added, the nurse’s comments and suspension can be a learning opportunity.

The central questions, he said, are these: “How do we make this thing that happened, how do we learn from it? How do we grow from it? And how do we develop a better community out of it?”

The nurse at the center of the controversy was suspended for her own safety and that of others, according to an official TriHealth statement. She did not respond to requests for comment.

An investigation is ongoing. In an internal memo, TriHealth wrote that every patient is entitled to reliable and compassionate care.

The name of the nurse is not released in this story because of the ongoing investigation and TriHealth's stated concerns about her safety.