French Football Federation president, "I don't want to be held hostage on homophobia" 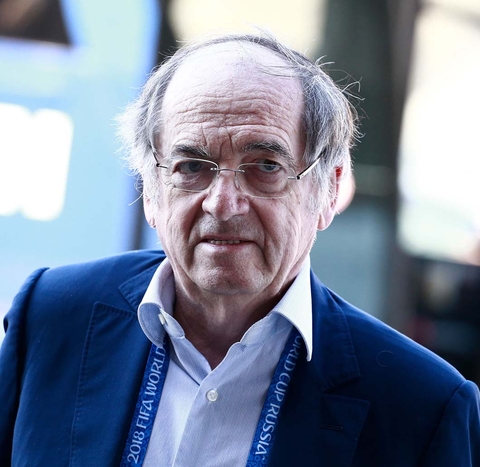 The president of the French Football Federation (FFF) has said he is "totally against" the interruption of football matches as a result of homophobic chants and banners, despite rules introduced by the FFF this season instructing referees to do exactly that.

Speaking to radio station France Info on Tuesday, Noel Le Graet said: "I would not stop the games. I do not want to be held hostage on homophobia. There are security services to ensure that these banners disappear."

French football has seen an increase in homophobic behavior in stadiums this season. A Ligue 1 match between Nice and Marseille was temporarily suspended last month when Nice fans unfurled several disparaging banners in the Allianz Riviera stadium.

According to reports, one of the banners criticized the French football league for approving more fenced off sections in stadiums, saying it would "make stadiums more gay." The word "gay" was in the rainbow flag colors of the LGBT community.

A match between Paris Saint-Germain (PSG) and Metz was also brought to a halt when referee Frank Schneider noticed an offensive sign in the home end of the State Saint-Symphorien.

"To say football is homophobic, that's a bit strong. I don't accept it," Le Graet said. "I would stop a game for racist chants, that is clear. I would stop it for a fight, for incidents, if there was danger inside the stadium. But stopping games [for homophobia], no. It's an error."

Kick It Out -- a UK organization that works to tackle discrimination in professional and grassroots football -- called Le Graet's views a "backward step," while FootballvHomophibia's Twitter account labeled the FFF president a "disgrace," criticizing him for deeming racism an offense, but not homophobia.

'For me, it's very good to stop the matches, whether for homophobic songs or racist songs,' Barcelona star and French international Griezmann told RTL. 'If we stop the matches, people will not be happy and they will stop doing it.'

France's sports minister Roxana Maracineanu has given her support to referees who suspend matches as a result of homophobic behavior.

Speaking after a game between PSG and Marseille in April, in which offensive chants reverberated around the stadium, she said: "It's simply inadmissible to hear what I heard. I don't see why we would allow ourselves to do things in a stadium that we wouldn't do elsewhere."

It was that incident that sparked the FFF and Maracineanu into action, instructing referees to intervene.

However, many fans are at odds with the decision makers. According to the BBC, a poll carried out for RTL Today showed that 61% of supporters felt that homophobic slurs were an acceptable part of fandom.

"The majority don't think they're hurting anyone," Jean-Michel Gocalves, a leading figure in the Nancy supporter's association, told the BBC. "We've got nothing against homosexuals. When we insult Metz, its more about tradition."

After the game against Marseille, Nice's Wylan Cyprien told Canal Plus that he disagreed with the verdict.

"We're not going to stop the game each time some morons do something," he said. "I'm against all forms of discrimination but you shouldn't stop the match for so little. Its ridiculous."

However, Nice coach and former Arsenal great Patrick Vieira took a different view and thought the referee was "totally right" to stop the game. Marseille captain Steve Mandanda concurred, saying, "You have to make a stand and then it stops."

As well as homophobia, football has had to deal with a number of racist abuse incidents across Europe since the new season got underway.

Earlier this month Inter Milan striker Romelu Lukaku was subjected to monkey chants from Cagliari fans as he stepped up to take a penalty.

Rather than condemn the behavior, Inter's core supporters known as Ultras penned an open letter to Lukaku, encouraging the Belgian striker to brush the incident off and consider it a testament to his prowess in front of goal.

CNN Sport contacted the FFF but has yet to receive comment.