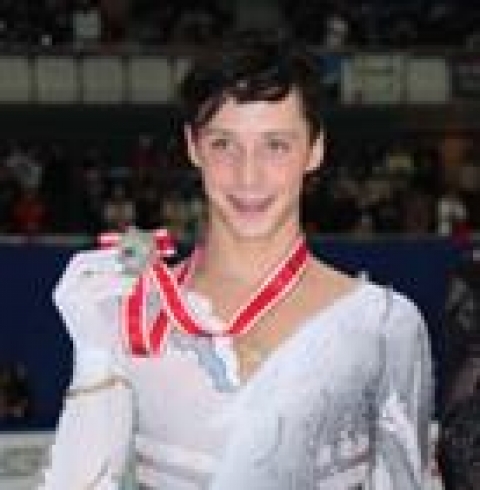 Sochi, Russia (AP) — He promised himself something the first time he ever laced up a pair of skates. It's the same thing Johnny Weir returns to in those quiet moments most evenings, just before the TV camera's "on-air" light flashes red.

"I'm wearing makeup, a double necklace and a cream sweater," he said. "I don't feel an obligation to tone myself down.

"Part of being afraid is not knowing," Weir added, "and I know Russia. I don't feel afraid."

At the moment, of course, it's easy to feel that way. Air-time is still a few hours off and he's sitting on a brick-red banquette inside a posh, Western-style hotel alongside his broadcast partner, former Olympic gold medalist Tara Lipinski.

The two became fast friends soon after NBC paired them last fall. They've had a soothing effect on one another every day since.

"We want to be 80," Lipinski said, "and still commentating on figure skating with each other."

He constantly fusses over her, straightening the collar on her jacket or making sure every strand of blond hair is in place. For her part, every time they step out in public, Lipinski instinctively links her arm inside his, as though they've been a couple forever.

"And so, as far as people being upset with me for being here," Weir added, referring to those in the LGBT community who demanded he boycott the Olympics to protest a tough anti-gay Russian law, "I want everybody to know that I'm proud being here and I'm proud to be representing gay America in my own small way."

Half an hour later, the two are standing in security lines, waiting to walk through a magnetometer en route to the NBC studios. On this day, he's decided to accent the cream sweater, skin-tight black leather pants and matching wedge-heeled boots with a salt and pepper-tinged fur cut from the finest sable.

It's an outfit that some people would die for and conversely, one that if worn in some corners of Russia by someone with less celebrity, might result in a severe beating or worse. Weir's first trip outside the country to compete landed him in Slovakia as a 13-year-old. He never forgot walking alone through empty streets and down a dark tunnel one night trying to find his way back to the hotel.

On this day, as Weir walks through the magnetometer and collects his watch, necklaces and coat, the guards closest to that station begin rolling their eyes and snickering. In a heartbeat, nearly every pair of eyes in every other aisle are drawn to Weir.

But because he never, ever breaks character, Weir pulls on his coat, smiles, slides a black Prada handbag down to the crook of his elbow and heads for the exit, staring straight ahead.

Behind a microphone, Weir is fearless — just as he was throughout a skating career that began perilously late, probably peaked too early, and almost certainly would have garnered more ribbons, titles (he won three national championships) and Olympic medals (zero) if only he'd been less confrontational.

Yet that attitude, coupled with a fierce intelligence and a love of fashion that began with childhood and still knows no bounds, is what made Weir a first-class commentator from the very beginning.

"She's too old to wear that baby pink color, especially with how tight it is," he said about skater Stacey Kemp of Britain at one of the competitions Weir worked during the run-up to these Games. "She needs a look that's more mature."

"She was wearing a nightie," he said at another, training his sights on Nathalie Pechalat of France, "which I don't think should be featured in any athletic endeavor."

And to be sure, Weir's outfits have not gone unnoticed, either.

A half-dozen websites and countless commenters across social media track his wardrobe changes daily, which have ranged from a hot-pink vintage Chanel blazer to a conservative gray Billy Reid jacket. Each has been accessorized by colorful shirts and pocket squares, gaudy necklaces and cocktail rings — and on one occasion a crown braid set atop his jet-black hair — all of it seemingly on loan from rappers or someone's elderly aunt.

Weir chronicles his favorites on his own Instagram account (http://instagram.com/johnnygweir ), featuring images with celebrities, regular fans and he and Lipinski hanging out.

Weir has been bashed by People for the Ethical Treatment of Animals for wearing fur, by some inside the skating community — even while he was competing — for being too flamboyant, and, after coming out publicly in his memoir and marrying Russian-born Victor Voronov, for not being strident enough.

Besides himself, the only people Weir is out to please are NBC and the audience to which his role as a broadcaster has given him access to.

"In hiring me to have a voice and an opinion, they hired knowing full well," he said, "knowing what kind of statements — fashion and otherwise — I like to make."

For Wednesday night's pairs free-skating program, Weir sits to the right of Lipinski and Terry Gannon, a broadcasting veteran who is the third member of the crew. He rarely looks at the monitor in front of him, staring intently at the ice instead and constantly folding and unfolding his hands. He smiles often, winces occasionally when a skater takes a tumble and is at his most animated watching others sit in the "kiss-and-cry" area after a performance.

"My coach, for example, would sit and she would smile like this," he said, drawing his lips tight, "and of course, she was talking between her teeth and saying the most horrible things in Russian, just screaming at me between her teeth. But of course, nobody could see what she was saying.

"Being judged in any way is difficult. But having to sit there and wait with the whole world watching you," he said finally, "that's a very difficult thing to do."