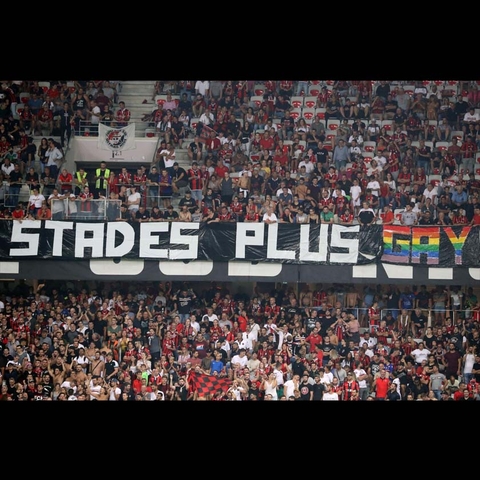 A top-flight soccer match in France was temporarily suspended on Wednesday after fans unfurled what appeared to be homophobic banners in the stands.

The Ligue 1 match between Nice and Marseille was halted for 10 minutes during the first half by referee Clement Turpin, with players escorted off the pitch at Nice's Allianz Riviera stadium.

According to reports, one of the banners in question criticized the French football league for approving more fenced off sections in stadiums, saying it would make "stadiums more gay." The word "gay" was in the rainbow flag of the LGBT community.

The other appeared to refer to Nice's new owner, British billionaire Jim Ratcliffe, who completed a takeover reported to be worth about $100 million Tuesday. Ratcliffe also owns the Team Ineos cycling outfit. The banner used a play on words with the word "pedale," which translates as "pedal" in French but is also used as a homophobic slur.

"The referee was right to stop the match," said Nice manager Patrick Vieira, in a press conference after the game.

"These things are unacceptable. The message was clear, and the referee didn't have a choice. He could have maybe given us a bit more time to go and see the supporters and to ask them to remove the banner. But he explained things to me that I fully understand.

"He didn't have a choice, and I think that he made the right decision. I hope that this won't happen again, in Nice or in any stadium."

Players eventually returned to the pitch, with Marseille beating the hosts 2-1.

Referees in France have been given new powers to stop matches if homophobic behavior persists.

Earlier in August, a match in France's second tier between Nancy and Le Mans was also suspended after supporters sung homophobic songs.

"Congratulations to referee Clement Turpin, whose commitment to respect for football is known to have interrupted the match #OGCNOM #NiceOM, despite the fact that, despite several withdrawal requests, a homophobic banner dirtied the stands," she wrote on Twitter.

"Football is a matter of passion not hate."