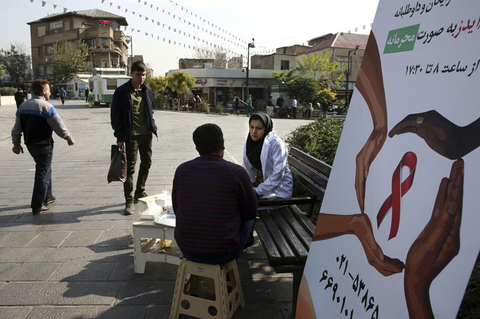 TEHRAN, Iran — In a square in a poor eastern Tehran neighborhood known for its drug addicts and dealers, psychologist Atefeh Azimi draws another drop of blood from a worried passer-by's finger.

She works on a nearby bench, where a sign next to her in English and in Farsi urges the public to receive free voluntary counseling and HIV testing.

But her worries, as well as those of her aid group called Reviving Values, are not confined these days just to those sharing needles to inject heroin that comes across the border from Afghanistan's thriving opium trade.

Iran has seen a surge in the number of HIV infections spread by sex, especially among its youth. What's more, authorities say many have no idea that they are infected.

That has led to growing uncomfortable questions in the Islamic Republic, where sex outside of marriage is prohibited and those who practice it can face arrest and severe punishment.

Some have dared challenge the long-standing taboos in Iran surrounding sex, speaking publicly about the need for safe sex, sex education and regular HIV testing.

"Everybody has a very bad attitude toward this disease," said Mahboobeh Zeinali, an HIV-positive woman living in Tehran. "They even think if they wash their hand where I do they can be infected, but they can't." 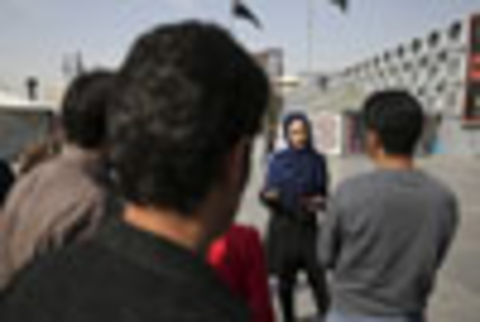 Samira Ghavipanjeh, a member of Reviving Values aid group, tries to convince passers by to get tested for HIV, in Tehran, Iran. AP Photo/Vahid Salemi.

According to government estimates, 66,000 people out of Iran's 80 million people have HIV, though about 30,000 of them have no idea they have the virus. Iranian authorities blame that on how little general knowledge many have about the virus.

By comparison, in the United States, government statistics suggest 1.1 million people live with HIV, with one in seven not knowing it.

More than 50 percent of those with HIV in Iran are between 21 and 35, said Parvin Afsar Kazerouni, the head of the Health Ministry's AIDS department. That's despite that age group representing about 28 percent of Iran's population as a whole.

The number of those infected through sex continues to rise.

"If we look at five or six years ago, the rate of infection through sex was around 16 or 17 percent, to 20 percent at the most. Now it is up to 40 percent or even more in some provinces," Dr. Mohammad Mahdi Gouya, Iran's deputy health minister, told The Associated Press. "This is an alert for us, the people and the officials. They are addressing this issue very seriously."

Related:
"I want to be heard in my healthcare"
Self-medicating the stigma away
Positive Heroes speaker series

Societal mores play a part in the rise of HIV infections. As a Muslim country, Iranian clerics preach against sex outside of marriage and sex isn't often discussed among children and parents. Schools offer little sexual education as well.

Sex outside of marriage is illegal and some have been prosecuted for merely shaking hands with a member of the opposite sex under Iran's strict interpretation of Islamic law, or Shariah. However, police rarely interfere with young couples in Tehran walking hand-in-hand and whispering to each other.

The government blames drugs in part for the increase in HIV infections — though not those narcotics that are injected with a needle.

Views on sex are also changing in Iran.

Previously, Iran allowed so-called "temporary marriages" or "sigheh" — a legal contract under Sharia law that allows a couple to share a hotel room or travel together, though it's not publicly or officially backed by the government. The contracts last anything between several hours to a few years but are increasingly abandoned in mainstream life in most of the Muslim world.

Lately, Tehran has seen a quiet move toward so-called "white marriages," or couples living together before being married even though it remains illegal.

Mohammad Mohammadi Golpayegani, Supreme Leader Ayatollah Ali Khamenei's chief of staff, has criticized the practice, warning the "loose generation" that its offspring will "be illegitimate."

About 60 percent of divorces across Iran come from those unhappy with sex in their marriages, said Mohammad Mahdi Labibi, a sociology professor at Tehran's Azad University.

"When one of them is not satisfied, they will look for it outside their marriage," in secret, Labibi said. Such "hidden sex increases the chance of being infected by any disease, including HIV."

Prostitution also has been acknowledged by the government as a problem. Members of parliament have discussed the issue before, along with other "social problems," according to Iranian media reports.

Today, Iran's government treats some 10,000 people either infected with HIV or those with already developed AIDS, which weakens the immune system and gradually destroys the body's ability to fight infections and certain cancers. It typically costs the government $16,000 a year to treat a patient, Gouya said.

"Most women here are in charge of their families, and unfortunately finding a job for them is very difficult," said Najimeh Babagol, a psychologist who works with HIV-positive women. "Many of them get rejected went they reveal (they are HIV positive) at work. I can say this stigma and discrimination is the biggest problem they are facing."

"Sex education should start from the kindergarten age," he said. "Every child should have full knowledge about sexual characteristics so that they can protect themselves and especially learn they have the ability to say no."

Gouya agrees that the young should have sex education.

"Our youth must learn about sexual issues in schools," he said. "Prevention is much easier than treatment of AIDS."

MEHDI FATTAHI and AMIR VAHDAT contributed to this report.