Michael Sam back at Mizzou, still hopeful for NFL career 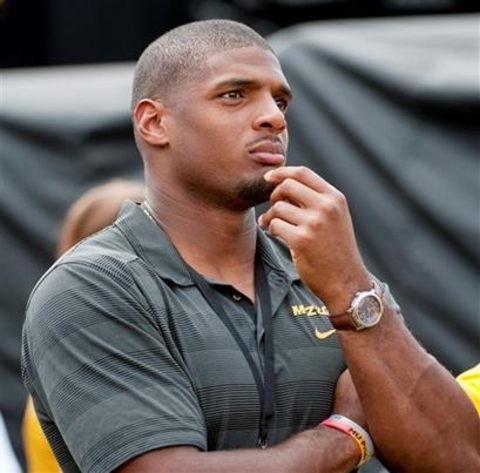 Columbia, Mo. (AP) — Michael Sam is back in Missouri, working on a master's degree and still hopeful for a career in the NFL.

Sam, the first openly gay player drafted by the league, told a Columbia, Missouri, TV station this week that his life has been a "roller coaster" since the St. Louis Rams picked him in the seventh round last year. The 2014 Southeastern Conference defensive player of the year from Missouri was cut by the Rams and spent part of last season on the Dallas Cowboys' practice squad before being released.

Sam, 25, signed a two-year deal with the Canadian Football League's Montreal Alouettes this summer, but quit in August after playing just one game. He said on Twitter at the time that the past year had been so difficult he was worried about his mental health.

Sam appeared relaxed in an interview on KMIZ-TV. He said he wants to return to the NFL in 2016.

For now, he's content to work on a master's degree at Missouri, trying to see if a career in broadcasting suits him.

"It's been a roller coaster," Sam said. "I've been trying to figure out what's next in my life. I've just come to a conclusion, as I take this break from football, I want to focus on my media training."

All of the media attention after Sam came out in February 2014 was overwhelming, he said, but eventually he got used to it. It also whetted his appetite for a career in media.

Still, he felt a need to scale down and step back. In addition to dropping out of the Canadian league, Sam parted ways with his agent and publicist.

Taking a break from football "was one of the smartest things I've done in a long time," he said. "I'm really just focusing on me right now."