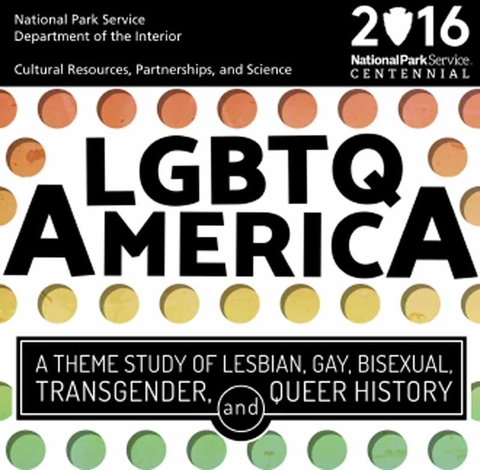 The release of the theme study coincides with National Coming Out Day. DOI image.

Washington – U.S. Secretary of the Interior Sally Jewell today joined National Park Service Director Jonathan B. Jarvis and Tim Gill, philanthropist and founder of the Gill Foundation to announce the release of a new National Park Service theme study identifying places and events associated with the history of lesbian, gay, bisexual, transgender and queer-identified Americans. The release of the theme study coincides with National Coming Out Day, a commemoration first celebrated in 1988 on the anniversary of the first March on Washington for Lesbian and Gay Rights.

LGBTQ America: A Theme Study of Lesbian, Gay, Bisexual, Transgender, and Queer History is the first of its kind study conducted by a national government to chronicle historical places, documents, people and events that shaped the LGBTQ civil rights movement in America. The National Park Service (NPS) coordinated the study with support from the National Park Foundation and funding from the Gill Foundation as part of a broader initiative under the Obama Administration to ensure that the NPS reflects and tells a more complete story of the people and events responsible for building this nation.

“For far too long, the struggles and contributions of lesbian, gay, bisexual, transgender and queer-identified Americans have been ignored in the traditional narratives of our nation’s history,” said Secretary Jewell. “This theme study is the first of its kind by any national government to identify this part of our shared history, and it will result in an important step forward in reversing the current underrepresentation of stories and places associated to the LGBTQ community in the complex and diverse story of America."

The theme study is a pivotal moment for the LGBTQ community as it establishes, for the first time, a framework for inclusion and recognition of places associated with people and events that made LGBTQ history and left a mark on American history. The theme study provides the big picture that will help these important places to be considered for designation as National Historic Landmarks or nominated to the National Register of Historic Places. It will also guide and inform the presentation of LGBTQ history by professors and teachers, and will serve as a reference for the general public.

Experts in LGBTQ studies wrote and peer-edited over 1,200 pages in the 32 chapters of the theme study. These chapters chart LGBTQ histories across the United States— from the native māhū of Hawai’i and lhamana of the Zuni, to the drag queens of the Stonewall Uprising, from private residences, hotels, bars, and government agencies to hospitals, parks and community centers. Authors and peer reviewers included professors, filmmakers, historians, geographers, archivists and museum curators, researchers, experts in historic preservation, historical archaeologists, journalists and members of the clergy.

“LGBT history is American history and as we celebrate the Centennial anniversary of the National Park Service, I can think of no better time to advocate for a more accurate and inclusive view of the American experience,” said Tim Gill, founder of the Gill Foundation.

"Thanks to the generous support of Tim Gill and the Gill Foundation, this important study was possible,” said Will Shafroth, president of the National Park Foundation, the official charity of America’s national parks. "This work helps expand the scope of the history preserved within our National Park System and honor an America that represents us all.”

Earlier this year Secretary Jewell and Director Jarvis returned to New York City to participate in a public dedication ceremony following President Obama’s designation of the Stonewall National Monument, the nation’s first monument to honor the story of LGBTQ Americans, on June 24, 2016.

In addition to the Stonewall National Monument, the Obama Administration recognized the Henry Gerber House in Chicago as a National Historic Landmark, and designated eight other LGBTQ sites on the National Register of Historic Places. These include:

In 2010, the National Historic Landmark (NHL) Program began actively looking for sites associated with LGBTQ history that may have the potential to be designated as NHLs or listed in the National Register of Historic Places. Owner approval for these sites is necessary before nominations can be prepared and the NHL Program has begun working with the LGBTQ community to encourage both outreach to owners and the completion of nominations for these properties.

The LGBTQ Theme Study is one of four such studies either recently completed or underway by the National Park Service. Other studies have examined or are studying the contributions of women, Latino Americans, and Asian Americans and Pacific Islanders. Previous studies on African-Americans and American Indians were completed in 2003 and 1990 respectively.