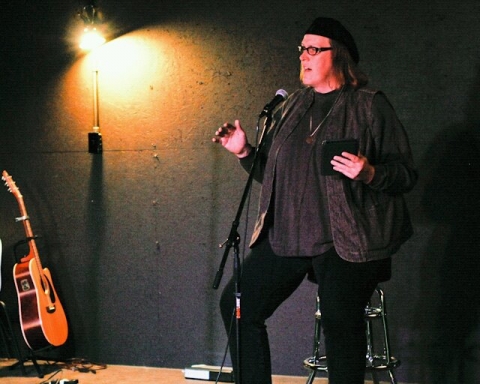 Years ago when I was performing spoken word at Galileo’s in the Paseo, a young woman festooned with body piercings, tattoos, and spikey hair approached me as I left the microphone. She had tears in her eyes, and when she hugged me, she held me for a long time, even beyond the moment when it felt awkward. I had never seen her before that night.

“You are proof that freedom still exists in this country,” she said. “Keep being you.”

Her words gave me courage in a time when I was beginning to feel weary from the daily gauntlet I faced at the police department – the snubs, the sneers, and the silence I endured from my colleagues after I first transitioned. Her words told me I wasn’t alone, that people were paying attention, offering prayers and hopes for my continued resilience. Her words clung to me like an award of valor pinned to my chest.

Her words came back to me when I attended the Department of Defense (DOD) Pride event at the Pentagon in Washington, DC last month, where I saw LGBTQ service members celebrating Pride Month in the courtyard at the center of the facility, something I would have never imagined during my days in the United States Army.

I saw service members from the rank of private first class on up to brigadier general being open about who they are, people who had devoted their lives to defending the United States of America, people who had spent careers defending freedom.

The truth is that LGBTQ people have served in the United States Armed Forces since the beginning of our country, most of them silently, most of them unrecognized for their resilience and dedication, many of them demonized and ostracized for being who they were. Some of them served with distinction. Some of them bled and died on the battlefield.

On September 6, 1968, it was Corporal Lloyd Thomas Darling of the 187th Infantry, 101st Airborne Division, who died during combat operations in Vietnam. Eric Alva, a United States Marine, was the first American casualty during the 2003 invasion of Iraq.

One of the most visible advocates for open service is retired Navy Seal Kristin Beck.

She had served with distinction throughout her military career, winning both a Bronze Star with a Combat Distinguishing Device and a Purple Heart. She became a national story after coming out of the closet in 2013 and is featured in the CNN Documentary Lady Valor.

Attending the DOD Pride event with me were several current transgender service members, one of whom is a recent graduate from the Naval Academy in Annapolis. She distinguished herself as a midshipman and won a flight school slot upon graduation, but her status as a transgender woman keeps her from continuing her career.

She told me she is in a kind of limbo, allowed to continue serving as a newly commissioned ensign but unable to attend flight school until the Department of Defense decides what to do with openly transgender service members. She told me she loves the Navy and hopes to have a career as a flight officer. The uncertainty was evident in her voice, the hope, too.

I told her, “You’re proof that freedom still exists in this country. Keep being you.”