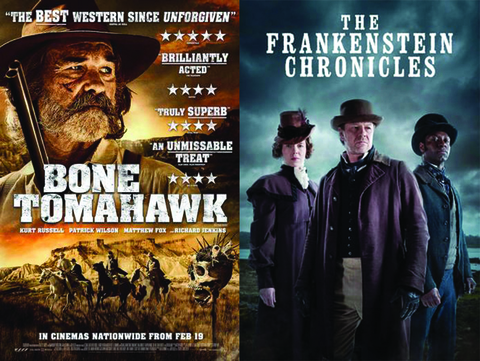 Bone Tomahawk: A bizarre cult film now and then is good for the soul. This directorial debut written by S. Craig Zahler is not for everyone since gory violence is quite active from beginning to end. If you are okay with this, then the rest is cult gravy.

This film might be considered a strangely comedic horror western, but it oddly defies too much classification. Kurt Russell is Frank Hunt, sheriff of the tiny Old West town. He leads a posse of four to track cannibal troglodytes who kidnapped townsfolk, perhaps to expand their menu choices.

The suspense is phenomenal, but besides a stellar cast, what makes this film are the roles which lean on the goofily dark and funny dialogue. Richard Jenkins steals the show as the widower "backup deputy" Chicory. Rounding out the unlikely posse is Patrick Wilson as the painfully determined husband of the kidnapped wife (Lili Simmons). Matthew Fox is the dandy gunslinger who kills at the drop of a hat.

The result is as if Quinton Tarantino meets John Ford meets Hannibal Lector. In fact, much of the fun is guessing which scenes homages to what films are. The far shot camp scenes are classically beautiful. Make sure to not miss the over-the-top theme song at the end entitled "Four Doomed Men Ride Out."

The Frankenstein Chronicles: (Seasons 1 & 2) This detective horror drama series set in 19th century London managed to rise from the dead of an A&E Network graveyard to find new life as a worthy binge monster with Netflix.

International star Sean Bean is incredible as the guiltily morose Inspector John Marriott. He’s on the trail of a scientist killer (perhaps) responsible for corpses with parts missing. Bean discovers a dead child on the beach made of stitched together parts of other children.

Thread in Mary Shelley in and what she knows with various gentry with connections and experiments.

Bean is drawn into the whirling politics of a Parliament passing an "Anatomy Act" which allows donating corpses of the poor to surgeons for practice.

The lighting of each scene has been perfected to look like period paintings. Costuming is from worn and drab to opulent as required for class separations. It’s fun to pick out the literary references and characters popping in and out such as poet William Blake and a journalist calling himself "Boz" which a young Charles Dickens used. It’s a bit of "Penny Dreadful" (only better) meets "The Alienist" richly multi-layered with historical complexities.