Listen "Out" - music you love 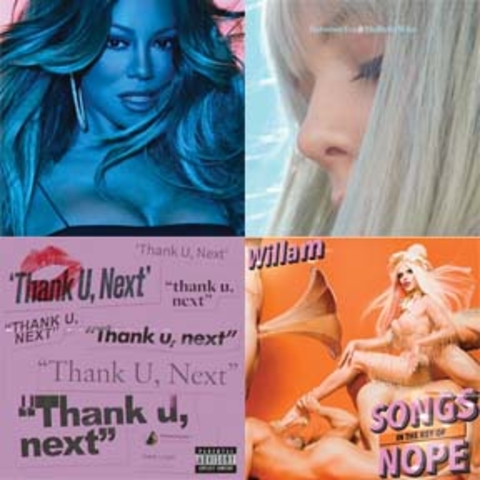 On the “elusive chanteuse’s” newest album, the 10 track “Caution,” the perennial diva gives fans a return to form.

Lead single, and album opener, “GTFO,” tells a suitor to kick rocks in a way only Mariah could pull off. In fact, the overarching theme of the album is dissatisfaction in love with an enduring hope. This is unsurprising, given the fact it comes after her divorce from Nick Cannon.

On the title track, she sings, “Proceed with caution, don’t be dishonest, I need you closer, to love me harder.” On “A No No,” she rebuffs, “You get too close, you just don’t know,” while on “The Distance” (feat. Ty Dolla $ign) shows a resilience; “They just want a piece, they don’t wanna see us going the distance.”

Overall, the album is neither forced nor over-produced and feels like a fresh, and straightforward entry into this diva’s sometimes overly florid catalogue.

Betty Who: Between You & Me

Betty Who’s newest single features her lovely warble over a track built on a strumming guitar. On the tender slice of acoustic-pop, she pines to know where she stands with a flirtatious friend, cooing “Just between you and me/I can feel something here/Wondering if you do too.”

The song structure, as well as Who’s voice, are somewhat reminiscent to the sound of Leona Naess’s 2001 folk-pop opus, I Tried To Rock You But You Only Roll.

The track is a first tease of her upcoming album, Betty, due in February 2019. The album will be Who’s first album as an independent artist. Both her 2014 debut and her 2017 album The Valley, were released on RCA, with whom she parted ways last year. She staked her claim as an indie artist with the release of the EP Betty, Pt. 1, of which all three songs will be featured on the full-length album.

Ariana Grande: thank u, next

On her newest single, Ariana Grande shouts out her exes, but rather than a diss track, as the title might suggest, the song serves as a message about learning something from everyone who comes into your life.

Ariana namechecks previous beaus over a rolling slow groove, sonically suggestive of 90s hip-hop, which seems to be on trend at the moment. The “god is a woman” singer holds back from the highest notes and biggest belts on this slow-burner.

The track is not included on her recent album, “sweetener, but rather is reported to be from a forthcoming album of the same name.” The accompanying hit video – the largest music video debut in YouTube history – features numerous remakes of several 90s/2000s teen comedies, such as Bring It On, Legally Blonde and others.

Willam: Songs In the Key of Nope

RuPaul’s Drag Race alum and internet sensation Willam Belli has just released his newest comedy album. The album stirred controversy immediately upon its release, but not for the reasons you might imagine. The album was originally titled Now That’s What I Call Drag Music vol. 1.0 but the producers of the hugely popular Now That’s What I Call Music franchise filed a copyright claim.

The album features the gamut of sometimes hilarious, sometimes disgusting parody tracks, where Willam riffs on popular songs by Rihanna, Lorde, and Dolly Parton, among others.

“Aileen” transforms Parton’s iconic “Jolene” to a pagan to executed serial killer Aileen Wuornos. The track features fellow RPDR queen Trixie Mattel. She and Latrice Royale mock Lorde in “Oral,” while slaying Derrick Berry on the Britney send-up “Derrick.” It may be telling that the best track on this album is a song about French fries, the aptly named “Fries,” featuring Rhea Litre.

Columns
music
Genre
Mariah Carey: Caution
Betty Who: Between You & Me
Ariana Grande: thank u
next
Willam: Songs In the Key of Nope