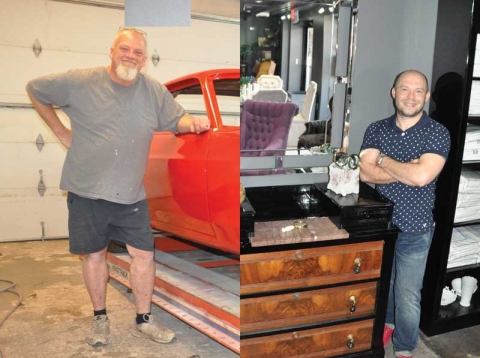 The partnership between Phil Glazener and Jimmy Rupp has proven to be valuable and profitable. Photos by Robin Dorner.

Business networking is important and can build valuable relationships. The uncommon partnership that makes up Phil Glazener and Jimmy Rupp began in a national marketing group and has proven to be valuable and profitable for these business owners.

“We both participated in a BNI [Business Networking, Inc.] group here in Oklahoma City and Phil knew my work in interior design and [knew] how he could assist in reinventing furniture,” said Rupp.

“Phil has painted personal pieces, but he has painted the pieces for Interior Gilt from my estate sale and auction finds,” added the interior designer. “I seek pieces with solid structure and great lines, but that need something added to make it relevant again.”

Rupp said Glazener takes the quality of work seriously no matter what he is doing and that adds peace of mind. “You get what you pay for and Phil really adds the value back to the pieces he works on.”

Glazener learned to paint from watching his dad.

“I also went to certified painting school at Sherwin Williams in Dallas,” he said.

Glazener’s dad is Dorsey Glazener – of “Dorsey and Son” Auto Collision and Repair which has been located near the famous OKC strip for 40 years. Phil took over the business about a year ago, but it was started in OKC by his grandfather in 1948.

“Painting furniture is harder than painting cars. It has a lot of corners and angles rather than curves.”

He enjoys painting in general because it’s his niche art form. But it’s not his trade – he’s a mechanic!

“I find the painting very challenging,” added the small business owner. “Sometimes you walk in and it’s a breeze and sometimes it’s hard as heck. It’s a multi stage now – used to be one stage. People get a better end product now. That’s with furniture and cars.”

Glazener said working with Rupp has been great because he wants to keep his business going for his son someday.

“It’s hard to work in a small building in OKC. If you look at the larger collision centers in OKC they have a lot more square footage. I just can’t do that with where I am, but I don’t want to leave this location.”

The strip has been the home of this auto body shop for many years.

Rupp said he likes working with Glazener because “No job is too large or too small for Phil and he is open to new ideas and suggestions.”