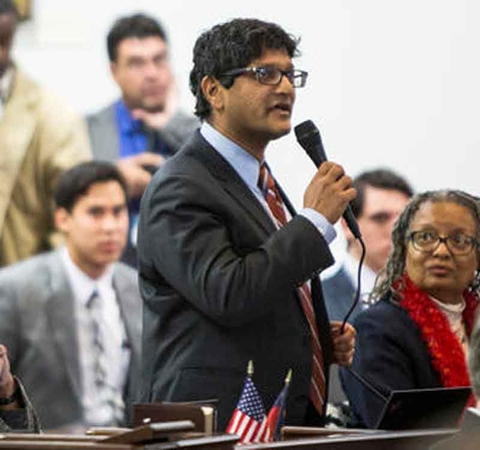 Raleigh, N.C. (AP) — After hours of delay Wednesday, wavering Republican legislators stumbled with pushing through the repeal of a North Carolina law dictating which bathrooms transgender people must use in government buildings and schools.

The addition of a six-month moratorium on cities passing nondiscrimination ordinances for LGBT people — like the one in Charlotte that led to House Bill 2 — caused Democrats to back away from the bill, calling it only a partial repeal. HB2 has been blasted by gay-rights groups and resulted in job losses and sporting event cancellations.

At the same time, House Republicans remained divided over supporting any repeal legislation, putting the ultimate result of the special session called by Gov. Pat McCrory in doubt.

Senate Republicans began debating the repeal measure that blocked local governments from passing ordinances regulating employment practices or public accommodations related to restrooms, showers or changing facilities for 180 days. But the GOP halted the debate after about 30 minutes and went into a private caucus to talk.

Democrats said the measure broke an agreement reached with Charlotte city leaders who repealed its ordinance that told city restaurants and hotels to let transgender people use the bathroom aligned with their gender identity.

"This wasn't the deal," said Sen. Jeff Jackson, a Charlotte Democrat. "This bill breaks this deal. Charlotte would have not repealed its ordinance is this was the deal."

GOP Senate leader Phil Berger of Eden, the repeal bill's primary sponsor, said the delay would give lawmakers time in 2017 to find a long-range solution to address issues that led to Charlotte's ordinance and HB2.

"It gives everyone an opportunity to start over," Berger said. "You don't get those chances very often ... an opportunity for us as a state to get this right.

But in another sign of mistrust between Democrats and Republicans since the GOP took control of state government four years ago, Republicans fired back that it was Charlotte city leaders who passed a partial repeal of its ordinance Monday. Council leaders disagreed with that assessment, but still met Wednesday morning — an hour before the special session began — to repeal other portions of the February ordinance that hadn't been invalidated by HB2.

This was nothing "other than an honest or sincere effort," city attorney Bob Hagemann told the council Wednesday. "The state is sovereign and we are not. ... We're not smart enough to try and trick them."

House Republicans couldn't seem to figure out what they wanted. They spent most of the day in closed-door meetings fighting about whether to approve a repeal bill. Several conservative lawmakers opposed any repeal and said the law needed to be preserved.

"There is no extraordinary circumstance," said Rep. Jeff Collins, R-Nash, during a brief debate over session procedures, "other than the extraordinary hubris of a city council telling us we have to act by a certain date." Monday's action by the Charlotte council was contingent on HB2's repeal by Dec. 31.

They and other social conservative groups said HB2 provides privacy and protection for children using restrooms and locker rooms. The U.S. Justice Department and others contend the threat of sexual predators posing as transgender persons to enter a bathroom is practically nonexistent.

Crowds at the Legislative Building remained inside the House and Senate galleries and in the third-floor rotunda all day, keeping watch on what action lawmakers would take. The mood was much more docile than the angry demonstrations of last week, when Republican legislators pushed through in a surprise session measures that stripped incoming Democratic Gov.-elect Roy Cooper of a range of powers enjoyed by McCrory.

Cooper made HB2 a key issue in his campaign against McCrory, saying he wanted it repealed and blamed McCrory for hurting the state's brand as a business destination. Cooper won by about 10,000 votes. McCrory conceded just two weeks ago after the vote count went into overtime.

Jennifer Bremer, 66, of Chapel Hill witnessed last week's tumult and wanted to see whether lawmakers really repealed the law. She says there haven't been any surprises so far.

"I think it's intended as cover to enable members who would otherwise oppose repeal to be able to say they got some positive outcome, something to say they stood up for something," Bremer said.

LGBT groups, which had fought any deal with legislators earlier this year to do away with the Charlotte ordinance, are frustrated by legislators adding the moratorium to the repeal.

"Today seems to be just about them still trying to not admit how badly they screwed up," said Mara Keisling, executive director of the National Center for Transgender Equality. "They should admit they messed up and repeal the bill."