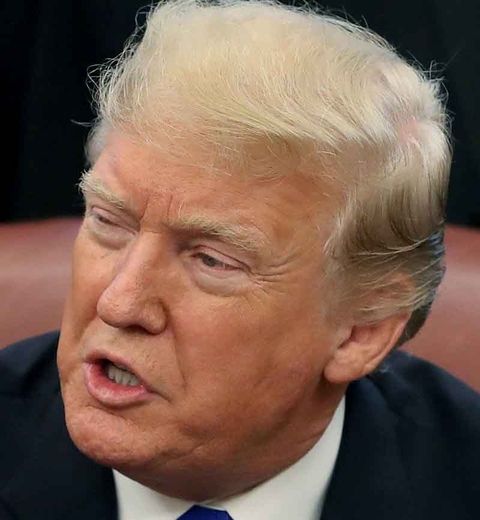 House Speaker Nancy Pelosi said during a news conference Thursday that she believes President Donald Trump "is almost self-impeaching" and argued that "he is every day demonstrating more obstruction of justice and disrespect for Congress' legitimate role to subpoena."

The speaker's comments come amid an escalation of hostilities between congressional Democrats and the President one day after the House Judiciary Committee voted to hold Attorney General William Barr in contempt of Congress.

Pelosi has argued in recent weeks that the President is effectively building a case on his own for impeachment by obstructing the work of Congress and has now started to use the term "self-impeach" to describe that.

In a Washington Post Live interview earlier in the week, Pelosi said the President is "becoming self-impeachable in terms of some of the things that he is doing."

The House Speaker said on Thursday that she agrees with House Judiciary Chairman Jerry Nadler's assessment that the US is now in a "constitutional crisis."

"Yes, I do agree with Chairman Nadler," Pelosi said during her news conference adding, "the administration has decided that they are not going to honor their oath of office."

Pelosi and other Democratic congressional leaders have so far taken a cautious approach toward the potential for impeachment and have downplayed the chances that it will actually happen, but Pelosi also appears to be increasingly frustrated with what she and other Democrats describe as the administration's stonewalling.

The President and his allies argue that Democrats are targeting Trump for partisan reasons and not for legitimate oversight purposes and Trump has vowed to fight "all the subpoenas."

Pelosi did not specify on Thursday when the full House will vote on whether to hold the attorney general in contempt, but she suggested that there could be "other contempt of Congress issues" that the House may want to deal with at the same time.

"In terms of timing, when we're ready we'll come to the floor, and we'll just see because there may be some other contempt of Congress issues that we want to deal with at the same time. And he wants to do it as soon as possible and so do we," Pelosi said.

Pelosi reiterated that impeachment would be a very divisive process for the country and argued that it is not a binary choice to impeach or not to impeach.

"Sometimes people act as though it's impeach or nothing. It's not that," she said. "It's a path that is producing results and gathering information and some of that information is that this administration wants to have a constitutional crisis because they do not respect the oath of office that they take to protect and defend the Constitution of the United States ... We won't go any faster than the facts take us or any slower than the facts take us."