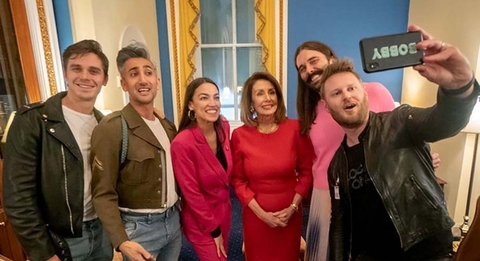 The cast of "Queer Eye" visited Capitol Hill on Thursday. From Nancy Pelosi/Twitter.

Can you believe? Lawmakers and Capitol Hill visitors alike simply could not when the cast of Queer Eye, the Netflix reality makeover show, visited Capitol Hill on Thursday.

Four of the show's five co-hosts were there not to make over lawmakers, but to drum up support for the proposed Equality Act, which would bar discrimination based on gender identity, sex and sexual orientation by expanding the 1964 Civil Rights Act.

On the agenda? A meet-and-greet with House Speaker Nancy Pelosi and Democratic Rep. Alexandria Ocasio-Cortez of New York. Selfies ensued.

".@QueerEye: feel free to let us know when you want @RepAOC & me to fill in next. #Fab5," the California Democrat tweeted.

Jonathan Van Ness, Queer Eye's grooming co-host, and Ocasio-Cortez both got the same style memo for the occasion.

"On Capitol Hill we wear pink," the congresswoman tweeted as she led the group through the halls.

Ocasio-Cortez professed that their visit "made my work day."

Fab 5 members Antoni Porowski (food and wine), Bobby Berk (interior design) and Tan France (fashion) joined Van Ness for the visit. Karamo Brown was not present, but his area of expertise -- culture -- was very much on his co-hosts' minds.

"We have the most diverse American congress ever, I'm lifted up in seeing that a United States that values Equality & protection for all is currently fighting for that," Van Ness tweeted. "We're making it rain pantsuits & equality in 2020."

France tweeted, "THE FUTURE IS FEMALE."

Porowski highlighted Jayapal's recent testimony in support of the Equality Act that her child is gender nonconforming.

"When you can personalize something you are having trouble understanding the importance of fighting for, it's a big step forward. #EqualityAct," he tweeted.