Recreational marijuana is now on sale in Massachusetts, and Pumpkin Spice Dust is on the menu 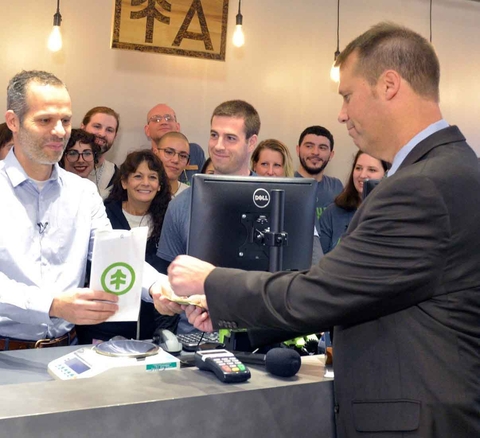 Massachusetts is the first state east of the Mississippi to sell recreational marijuana. AP photo via CNN.

Recreational marijuana is now for sale on the East Coast.

Massachusetts became the first state east of the Mississippi to legally sell recreational weed Tuesday as two marijuana dispensaries opened to the public more than two years after voters approved its use.

The two dispensaries are Cultivate Holdings in Leicester and New England Treatment Access in Northampton, located in the central and western parts of the state, respectively.

"To get here, licensees underwent thorough background checks, passed multiple inspections, and had their products tested, all to ensure public health and safety as this new industry gets up and running," Cannabis Control Commission Chairman Steven J. Hoffman said.

Massachusetts residents voted to legalize the use, distribution and cultivation of recreational marijuana in a 2016 referendum.

Both stores opened to long lines of customers eager to get their first taste of legal weed. The menu at Cultivate Holdings includes various strains of marijuana flower, edible cookies, oils, and something called Pumpkin Spice Dust.

Cultivate Holdings said on Instagram that its first customer was Stephen Mandile, an Iraq War veteran who was wounded in combat.

"It's an honor, something amazing. I probably dreamed about it back in high school that this day would happen sometime," Mandile told CNN affiliate WBZ. "I'll be smoking some history later on today."

New England Treatment Access's first customer was Northampton Mayor David Narkewicz, who grinned for cameras as he made the purchase.

Buyers must be at least 21 years old and the retailers cannot sell more than one ounce of marijuana or five grams of marijuana concentrate, according to the commission. Leicester Police warned that the legalization of weed does not make it legal to use while driving or for those under 21.

A number of states have legalized the use of marijuana for recreational purposes in recent years, and an October 2017 Gallup poll found that nearly two in three Americans say the drug should be legal.