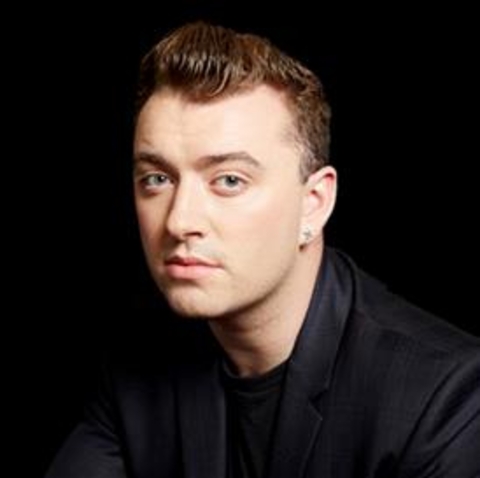 Los Angeles (AP) — Sam Smith's songs have brought fans to tears, but he was choked up when he earned his first Grammy Award for best new artist.

"Oh my gosh. I have to try to say something without crying," the singer said onstage, wearing a burgundy suit.

Taylor Swift presented the award to her friend, who is nominated for five other honors, including album, song and record of the year.

"As a former loser of best new artist ... it's gonna be fine. Just shake it off," Swift said.

In one of 23 performances set for the awards show, AC/DC kicked off the show with a performance of their latest single, "Rock or Bust," and then transitioned into the classic "Highway to Hell." It earned a rousing applause from Pharrell, Lady Gaga and Katy Perry, who wore devil horns.

"Reagan was president last time I won a Grammy," said Cash, who won best American roots performance, American roots song and Americana album Sunday. "I just showed up for work for 35 years and this is what happened."

Lamar, who lost in seven categories last year, marked a redemption by winning best rap performance and rap song for "i."

Beyonce, Pharrell and Smith were the Grammy leaders with six nominations each.

"I'm just happy people know who I am," Smith said on the red carpet. "Last year, no one knew who I was."

Smith added that if he won Sunday night, he would celebrate at In-N-Out Burger.

The late Joan Rivers won best spoken word album for "Diary of a Mad Diva," and her daughter, Melissa Rivers, was on hand to accept the award.

"If my mother was here tonight, she would not only be honored and thrilled to be holding her first Grammy, she would most likely have it copied and on the air on QVC by 11," Melissa Rivers said to laughter.

The awards show, airing live from the Staples Center, is set to feature performances from Katy Perry, Pharrell, Sia, John Mayer, Mary J. Blige and Beyonce, who is nominated for album of the year for the earth-shattering release of her self-titled effort.

She caused a frenzy, set records and reached new heights. "Beyonce" not only marked a moment in pop culture, it is part of music history.

The singer, who is the most nominated female in Grammy history, could continue with history-making moments if "Beyonce" wins album of the year.

She faces tough competition: Smith, the crooning darling who stole hearts with his piercing voice and breathtaking ballads, is also nominated for album of the year. Pharrell's "G I R L," Beck's "Morning Phase" and Ed Sheeran's "X," the most streamed album on Spotify last year, are also up for the top prize

"I've lost many, many times, so I'm very acclimated to losing," Beck said in an interview. "But I'm definitely in the camp of a nomination is good enough; you know, just getting to be there, just being part of it."

While the race for album of the year is hotly anticipated, the performances are likely to dominate day-after conversation. Rihanna will perform her new single, "FourFiveSeconds," with Kanye West and Paul McCartney; Madonna is set to hit the stage; and other performances range from AC/DC to Ariana Grande, Herbie Hancock and Lady Gaga with Tony Bennett.

Smith, who will also perform, will compete for best pop vocal album for "In the Lonely Hour" and best pop solo performance, song and record of the year for "Stay With Me." He scored nominations in all four top categories.

Azalea, whose had four nominations, lost best new artist, rap album and pop duo/group collaboration with "Fancy." But the Australian performer's breakthrough hit is nominated for record of the year.

Taylor Swift's "Shake It Off," Meghan Trainor's "All About That Bass" and Sia's "Chandelier" are nominated for both record and song of the year. Hozier's haunting "Take Me to Church" rounds out the list of song of the year nominees.

Hozier said on the red carpet regardless of whether he wins, he has a music video to shoot after he's finished with the awards.

"Hangover or not, there will be a music video," he said.

By Mesfin Fekadu, AP Music Writer. Copyright 2015 The Associated Press. All rights reserved. This material may not be published, broadcast, rewritten or redistributed.