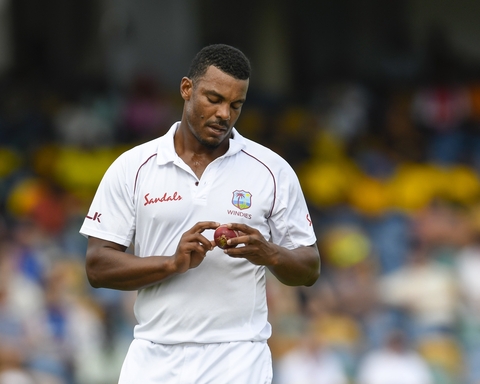 Gabriel's comments were not picked up on the game's live coverage, but footage shared on social media showed England captain Joe Root appearing to respond to the West Indian bowler's jibe by saying: "Don't use it as an insult. There is nothing wrong with being gay."

Gabriel, who hails from Trinidad and Tobago, has been banned for four one-day international matches after accepting a charge brought by the International Cricket Council, which saw him reach a total of eight demerit points -- the sport's disciplinary penalty system -- in a two-year period.

"I extend an unreserved apology for a comment which in the context of on-the-field rivalry, I assumed was inoffensive picong and sporting banter," said Gabriel in his apology to Root and both teams. "I know now that it was offensive and for that I am deeply sorry."

He explained: "The exchange occurred during a tense moment on the field. The pressure was on and England's captain Joe Root was looking at me intensely as I prepared to bowl, which may have been the usual psychological strategy with which all Test cricketers are familiar.

"I recognize now that I was attempting to break through my own tension when I said to Joe Root: 'Why are you smiling? Do you like boys?'

"His response, which was picked up by the microphone was: 'Don't use it as an insult. There's nothing wrong with being gay'.

"I then responded: 'I have no issues with that, but you should stop smiling at me'."

Gabriel added that both he and Root had since spoken in order to clear the air between the pair.

"I embrace this as a learning experience and as an opportunity for myself and all athletes to recognize the need for sensitivity and respect in their interactions with all," added Gabriel.

Although Gabriel has not played in any of the West Indies' last 19 one-day internationals and had not been initially included in the squad for the upcoming series with England, it is thought that he may have been recalled as a result of injuries to other bowlers.

Root, meanwhile, has received widespread praise for his response to Gabriel's comments. After the incident, Root said: "As a player you feel you have responsibilities to uphold on the field and I stand by what I did. I just did what I thought was right."

Former England captain Nasser Hussain tweeted: "I don't know who said what to whom ... but boy do I applaud Joe Root's reaction here. For me his twelve words as a role model will be in the end more important than a test hundred or possible victory."

The controversy is the second in a matter of weeks to be picked up by the stump microphones. I January, Pakistan captain Sarfaraz Ahmed was banned for four Test matches after he was found to have made racist comments towards South African all-rounder Andile Phehlukwayo.