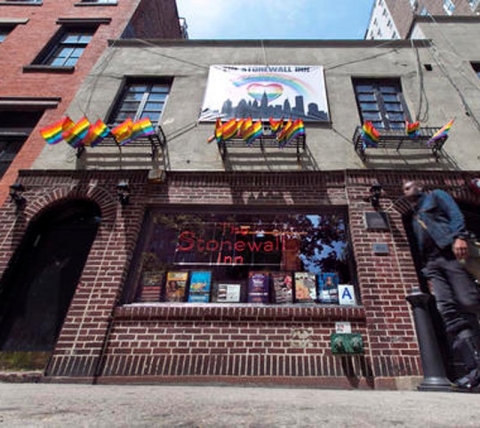 The Stonewall Inn is part of the Stonewall National Monument in New York City, which was dedicated today. AP Photo, Richard Drew, File.

Following President Obama’s historic designation of the Stonewall National Monument on Friday, and his weekly radio address which featured a moving video reflecting on the LGBTQ rights monument, attention turned this morning to the dedication ceremony for the monument.

CBS New York reported on the ceremony, quoted Jarvis as saying, “’I could not be more proud than today, where we are here to celebrate and recognize the first new unit of the National Parks system, the first national monument dedicated to the story of the lesbian, gay, bisexual, transgender community and their fight for equal rights.”

Featured speakers, according to the Associated Press and other sources, were Secretary Jewell, US Senator Kirsten Gillibrand (D-NY) and New York City Mayor Bill de Blasio among many others.

CBSNewYork reported, “At Monday’s ceremony, de Blasio said New York City has a special role to play in the fight for equality.

“’In a nation where there is still too many voices of division, and they’ve seemed to have come out ever more strongly in the year 2016, and we see it around the world as well. This city has to remain a beacon of inclusion and understanding and respect and we have to show it works,’ de Blasio said.

The Stonewall National Monument will cover a 7.7-acre swath of Greenwich Village, including the tavern, and the adjacent Christopher Park, locally known as Stonewall Park, and the surrounding streets where people rioted after the tavern was raided by police in 1969, reported the AP.

ABC7 reported, "’Stonewall is finally taking its rightful place in American history,’ said Rep. Jerrold Nadler, D-N.Y., who had advocated for federal recognition for the site.”

“It is really honoring the Stonewall veterans and everyone who was here during riots and all the people who have worked on the struggle for equality,” said Stonewall co-owner Stacy Lentz, in an interview with CBSNewYork.