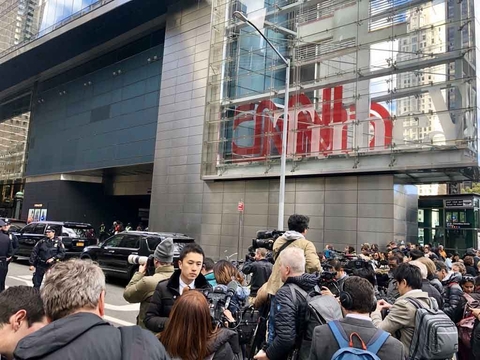 Authorities have intercepted suspicious devices intended for former President Barack Obama and Hillary Clinton, and the Florida office of Democratic Rep. Debbie Wasserman Schultz was evacuated Wednesday after a suspicious package was mailed there. 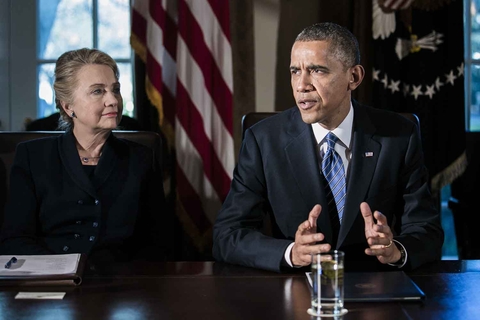 In addition, two law enforcement sources said a suspicious package was intercepted at a congressional mail screening facility in Maryland; New York Gov. Andrew Cuomo said a device was sent to his Manhattan office; and the San Diego Union-Tribune evacuated its building after "suspicious looking packages" were spotted outside.

The developments, which unfolded rapidly and continued steadily into the afternoon, touched off fear and confusion and immediately invited questions about the motives of those responsible.

"This clearly is an act of terror attempting to undermine our free press and leaders of this country through acts of violence," New York Mayor Bill de Blasio said at an afternoon news conference.

CNN, citing a law enforcement official, was initially told a suspicious package containing a pipe bomb that was addressed to the White House was intercepted at Joint Base Bolling in Washington, DC. The Secret Service, however, later said it had only intercepted the two packages intended for Obama and Clinton and called reports of a package headed for the White House "incorrect."

Bryan Paamann, an FBI special agent in charge of the counterterrorism division in New York, said the devices appeared to be pipe bombs.

A law enforcement source said the device found in the Time Warner Center's mailroom is similar to the ones addressed to Obama, Clinton and billionaire investor and major Democratic donor George Soros, which was discovered earlier this week.

Another law enforcement official told CNN that the initial examination of all of the devices shows them to be constructed similarly. At least one of the devices appeared to contain projectiles, including shards of glass. The devices are rudimentary but functional.

The suspicious package sent to Wasserman Schultz's Florida office was intended for former Attorney General Eric Holder but had the wrong address, two law enforcement sources said. It was returned to the Democratic congresswoman because that was the return label on the package, the sources said, adding that it was the same return address for the packages sent to Obama and Clinton.

There is no information that suggests she sent the packages. The bomb squad was investigating the package discovered at Wasserman Schultz's office, a local police spokesman said. It was not immediately clear if the package contains a device similar to the others detected around the country.

Neither Obama nor Clinton received the packages sent to them or were at risk of receiving them, the Secret Service said. They were discovered during "routine mail screening procedures as potential explosive devices and were appropriately handled as such," the agency said in a statement.

Speaking in Florida early Wednesday afternoon to campaign for Democrat Donna Shalala's congressional bid, Clinton said she and her husband, former President Bill Clinton, were "fine" and praised the response by the Secret Service.

"It is a troubling time, isn't it? And it's a time of deep divisions, and we have to do everything we can to bring our country together," Clinton said.

The package intended for Obama was intercepted in Washington, DC, and the one intended for Clinton was addressed to her in Westchester County, New York, on Tuesday.

The FBI said the package intended for Clinton was found in the vicinity of her residence in Chappaqua, New York, but offered no additional comment, citing the ongoing investigation. Representatives for the Clintons referred press inquiries to the Secret Service, and a spokeswoman for Obama did not immediately respond to a request for comment.

The White House said it condemned the "attempted violent attacks."

"These terrorizing acts are despicable, and anyone responsible will be held accountable to the fullest extent of the law," White House press secretary Sarah Sanders said in a statement. "The United States Secret Service and other law enforcement agencies are investigating and will take all appropriate actions to protect anyone threatened by these cowards."

President Donald Trump has been briefed on the situation and is receiving "constant updates," Sanders said. Responding to a tweet from Vice President Mike Pence, who said the administration condemned the "despicable" actions, Trump said, "I agree wholeheartedly!"

The device sent to Time Warner Center was constructed with a pipe and wires, according to a New York Police Department source. It was a "live explosive device," NYPD Commissioner James O'Neill said at an afternoon news conference, adding that police were also investigating an envelope containing white powder that was found as part of the "original packaging" of the device.

The building's evacuation included offices for WarnerMedia and other Turner-owned properties like TNT, as well as a shopping mall and a Whole Foods grocery store located in the basement level.

The package was removed from the building late Wednesday morning and was sent to an NYPD facility in the Bronx, a law enforcement official said.

The NYPD increased patrols at media locations in the city and other potential areas, a spokesman for the department said. Officials from the Bureau of Alcohol, Tobacco, Firearms and Explosives are at the sites of the multiple packages and were at Soros' Bedford, New York, home on Tuesday, a spokeswoman said.