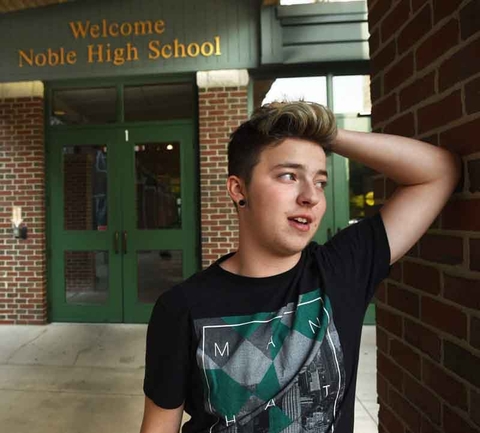 Portland, Maine (AP) — A transgender Maine teen who was crowned homecoming king at his new school says love and tolerance motivated his schoolmates to support him, and he wants to use his time in the spotlight to spread that message.

Noble High School in North Berwick, Maine, named Stiles Zuschlag homecoming king on Oct. 6. The 17-year-old, who came out as a transgender male in 2015, said he was selected by peers after joking on Snapchat that it would be hilarious if he won.

Zuschlag said he transferred to Noble this year after he was asked to leave Tri-City Christian Academy in Somersworth, New Hampshire, because of his gender identity. His story has been widely circulated on social media since he was crowned homecoming king.

He said he has received both support and blowback since his story went public, but he has "done nothing but spread awareness and love," and he plans to keep it that way.

"The fact that I can be a face for transgender kids struggling, or people who are going through a trial — they'll see in the end that they can get through," Zuschlag told The Associated Press. "No matter what, it has to get better."

Zuschlag said he thinks the fact that his name was still listed as his birth name on homecoming king ballots felt like "a sign from God that it doesn't matter what gender you are, you're still royalty in my eyes." He's looking forward to pursuing college and an acting career after high school.

His mother, Mara Stupelis, said she is supporting her son during his transition and admires his message of positivity. She described him as a dedicated student and athlete who loves contemporary Christian music, soccer and snowboarding. They live in Lebanon, Maine, about an hour southwest of Portland.

"He's got much more value. He's got a soul. We all do. When you cut us all, we bleed the same," Stupelis said.

Zuschlag said he also has received support on social media networks, where some members of the transgender community have shared his story as a tale of perseverance and acceptance. Zuschlag said he appreciates the support, and wants to keep setting an example.

"I'm a transgender boy ready to change the world for the better. I'm gonna spread love where there's hate," he tweeted on Oct. 7.