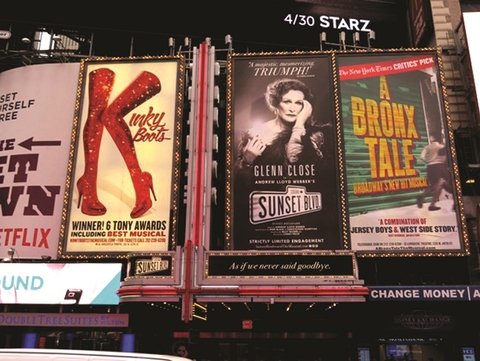 The 71st Annual Tony Awards will be June 11. Photo by Vick Silkenpen.

In anticipation of the 71st Annual Tony Awards on June 11 at Radio City Music Hall, I very recently indulged my travel bug with a Broadway crawl of plays and musicals.

It’s rather amazing how many quality film and TV actors are presently appearing in Broadway productions which extend right into the Tony’s host choice of Kevin Spacey. Well-known from his House of Cards fame as vicious politician, Frank Underwood. As well as his brilliant and award-winning film roles such as those in American Beauty and The Usual Suspects, Spacey's trophy case includes a Tony for his 1991 stage performance in Lost In Yonkers.

The Tony nominees this year include a cavalcade of other TV and film stars you should recognize such as Chris Cooper, David Hyde Pierce, Kevin Kline, Cate Blanchett, Danny DeVito, Mark Ruffalo and more.

Rather than discuss each Tony category and make predictions of winners (well, perhaps a few) I would rather talk about a musical and several plays which really impressed me and which I can highly recommend any tourist see this month if they travel to NYC.

I was a bit tentative about going to see Glenn Close reprise her role as the faded silent film star Norma Desmond in the limited engagement musical revival of Sunset Boulevard, but Close really delivers with seasoning and poignancy. Her performance evokes unexpected emotional responses in the audience right up to the standing ovation ending.

Much younger when she won the role in 1995, she now brings a more sympathetic richness to the stage. I don’t understand why it has been skipped for Best Revival of a Musical but this leaves Bette Midler in Hello, Dolly to perhaps pick up that honor.

The play Sweat takes an unforgettably penetrating look at the effects among factory worker friends due to economic downturns, competition, labor, immigration and social upheavals. Actresses Michelle Wilson and Johanna Day stand out enough to ironically compete against each other in the Best Featured Actress in a Play category.

To watch two actresses also pull off some unique stage magic catch Laura Linney and Cynthia Nixon switching roles every other performance of Lillian Hellman's The Little Foxes which nets them both nominations in differing categories. Richard Thomas (yes, from The Waltons) also picks up a well-deserved nomination.

However, perhaps one of the most complex experiences I had this time as a critic was with a minimalist version of The Glass Menagerie. Madison Ferris in the role of Laura shatters barriers as an actress with muscular dystrophy.

Sally Field as the controlling mother is pitch perfect as she channels a voice of such a famous Tennessee Williams character but one touch that added another superbly haunting element was casting Finn Wittrock from TV's American Horror Story as the vibrant gentleman caller.

You may think you know this play but you don't until you see this production.