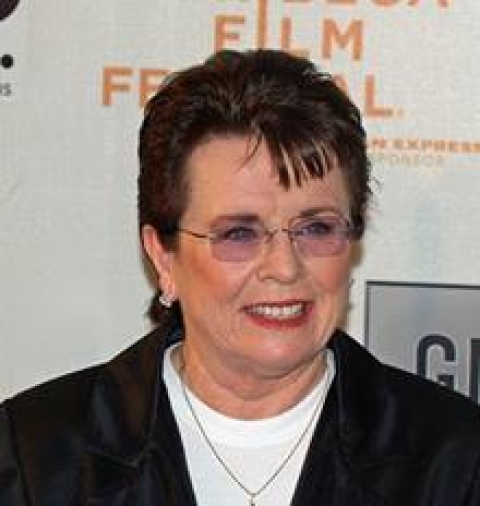 Billie Jean King said "I will use this trip to honor the memory of my mother and to further my mission of equality." Photo by David Shankbone / GFDL.

Washington (AP) — Billie Jean King will attend the closing ceremony of the Sochi Olympics in Russia.

King, who couldn't attend the opening of the Sochi Games because of her mother's death, will join American speed skaters Bonnie Blair and Eric Heiden on Feb. 23 as part of President Barack Obama's official U.S. delegation.

King called it a "privilege" to attend.

"I will use this trip to honor the memory of my mother and to further my mission of equality," King said in a statement to The Associated Press. "I am thankful to President Obama for including me and I look forward to supporting the men and women of Team USA in Sochi."

Russia has been widely criticized for passing a national law last year that banned gay "propaganda" to minors.

King and two other openly gay athletes — Brian Boitano and Caitlin Cahow — were selected for the delegation at the opening ceremony. Obama said it showed the U.S. doesn't make distinctions based on sexual orientation.

Cahow, a member of the U.S. women's hockey team that won the bronze at the 2006 Turin Olympics and silver at the 2010 Vancouver Games, said she's experienced no backlash in Russia, adding that everyone has been "unbelievable welcoming."

The White House said Friday the closing ceremony delegation will be headed by Deputy Secretary of State William Burns and includes Michael McFaul, the U.S. ambassador to Russia. The delegation will attend athletic competitions and meet with U.S. athletes.

King was selected in December to help lead the delegation. Two days before Feb. 7 opening ceremony in Sochi, King announced she wouldn't attend because of her mother's failing health.

Betty Moffitt, 91, died at her home in Arizona on the day of the opening ceremony, with King and brother Randy Moffitt at her side.