Buttigieg responds to Limbaugh's homophobic remarks: "I love my husband" 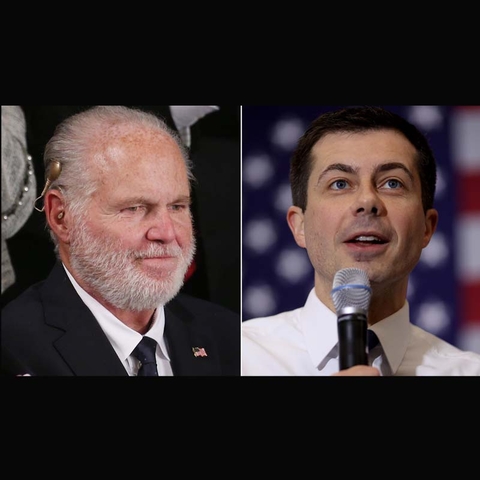 "Well, I love my husband. I'm faithful to my husband. On stage we usually just go for a hug. But I love him very much, and I'm not going take lectures on family values from the likes of Rush Limbaugh," Buttigieg, who is gay, told CNN's Dana Bash on "State of the Union."

Limbaugh specifically mentioned Buttigieg kissing his husband on the debate stage and questioned how it would play out with American voters should Buttigieg become his party's nominee and face-off against President Donald Trump in November.

Earlier this month, Trump awarded Limbaugh the Medal of Freedom, the highest civilian honor, during his State of the Union address. Asked last week whether Americans would support a gay candidate for president, Trump said he would not be opposed to a member of the LGBTQ community serving as president.

In a Gallup poll released earlier this month, more than 3 in 4 Americans (78%) said they would be willing to vote for a gay or lesbian person if they were a party's "Well-Qualified" candidate for president.

"These homophobic attacks against @PeteButtigieg are hateful and offensive. We will not tolerate this in the Democratic presidential race, and we will fight together against the hate and bigotry that Donald Trump promotes and rewards," Warren wrote in a tweet.

Former Vice President Joe Biden also responded to the homophobic remarks last week, saying the comments are "part of the depravity of this administration."

"I mean the idea that, you know, Pete and I are competitors, but this guy has honor, he has courage, he's smart as hell," Biden said.