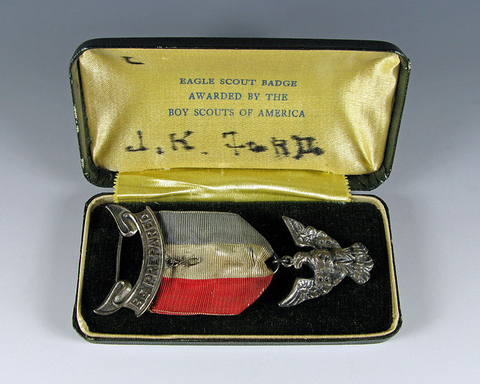 Pictured above is President Gerald Ford's Eagle Scout badge. Based on the policy of the Boy Scouts of America, if President Ford had been gay, he could not have received this badge. File photo.

SAN FRANCISCO (AP) — A review board has challenged the Boy Scouts of America's prohibition on gaymembers by recommending a local teenager for the rank of Eagle Scout, but the action won't have an immediate effect on the young man's status, his father said Tuesday.

The four-member board unanimously approved 18-year-old Ryan Andresen's application on Dec. 31 and hand-delivered it to the Mt. Diablo-Silverado Council's leadership, the boy's father said.

The board agreed to review Ryan's qualifications after the Moraga teen's scoutmaster refused to sign off on the paperwork after Ryan came out as gay last fall.

But the staff executive has refused to forward the recommendation to the national organization for final approval, leaving the board's endorsement as only a moral victory for the boy's family. Eric Andresen said he didn't expect national Boy Scout leaders to support his son, but is still disappointed.

"Ryan always has been the mentoring type, the big brother type. He saw this as not only an opportunity, but a responsibility to try to make change, and he has said it many times that he doesn't want any other Scout to have to go through this," Andresen said. "It's just blatantly unfair."

Ryan's experience has received national attention since October, when his mother launched a petition on the social advocacy site Change.org demanding action on her son's stalled Eagle Scout bid. More than 460,000 people have signed it.

Boy Scouts of America spokesman Deron Smith said the volunteer review board does not have authority to act on behalf of the regional council and that Ryan doesn't meet the Scouts' membership criteria.

"The Eagle application was forwarded, by a volunteer, to the local council but it was not approved because this young man proactively stated that he does not agree to Scouting's principle of 'Duty to God' and does not meet Scouting's membership requirements," Smith said. "Therefore, he is not eligible to receive the rank of Eagle."