Clinton has a lot of promises to keep 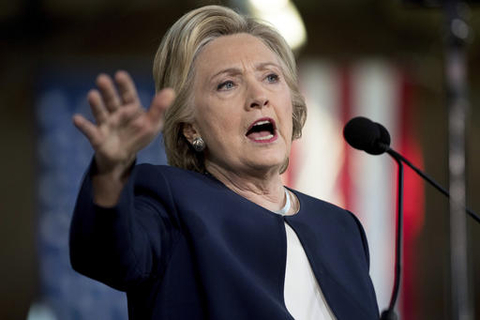 DES MOINES, Iowa (AP) — If Hillary Clinton makes it to the White House, a whole lot of eyes will be on her list of do's and don'ts.

Throughout the presidential campaign against Donald Trump, Clinton has made some very specific pledges about what she would and wouldn't do. Those could come back at Clinton if she's elected, because she could be governing in a politically polarized environment. Republicans and liberal Democrats would keep watch to see whether she keeps her word.

Charles Chamberlain, executive director of Democracy for America, said liberals would look at how Clinton tackles issues, saying "the key is seeing if she actually fights, rather than insisting that she has to achieve that goal."

Complicating Clinton's path is the reality that the best-laid plans can change. President George H.W. Bush, for example, pledged "no new taxes," but eventually agreed to a budget compromise with Democrats that did include some tax increases. He lost his re-election bid to Democrat Bill Clinton.

A look at some pledges Hillary Clinton made in the final presidential debate and what they could mean for her as president:

Clinton has focused her campaign on working- and middle-class families, and promised to tax the wealthy to pay for more social programs, but repeatedly said those making $250,000 or less will be exempt. That's the cutoff her campaign has identified to protect the middle class. Clinton says that by taxing the wealthy, she won't create any new debt, though she has not said she would cut the current debt.

This tax pledge means any new fees or costs for lower-earning families will be scrutinized. When it comes to the national debt, Packer notes "there's a lot of different ways you can do the math that make that a very hard promise to keep."

This is a big one for Clinton. She came out against the trade deal last year amid mounting pressure from liberals. She previously praised the deal as secretary of State, calling it the "gold standard" of trade agreements. In the past, she has supported some trade deals and opposed others.

So progressives will watch Clinton if she wins, not just after Jan. 20, but during the transition as well, to see if she mounts opposition to a vote in the lame-duck Congress.

"It's going to be critically important that she steps up, she stand up and says it's not going to be passed in the lame duck," said Chamberlain, adding that if Clinton does not take such a stand "in many people's eyes that would be breaking a promise."

"I will not support putting American soldiers into Iraq as an occupying force."

Clinton has made it clear that she does not want more American soldiers to serve on the ground in the Middle East. There are several thousand U.S. troops in Iraq now serving as trainers and advisers to the Iraqi military. She has made similar statements about Syria, where dozens of U.S. special operators are helping. Still, Chamberlain said that on this pledge, liberals see "a lot of wiggle room there. The progressive movement wants to see less military action period."

Republican strategist Rick Tyler, who advised Texas Sen. Ted Cruz's presidential bid, said that this is the type of promise that could be hard, depending on world events. "You could claim you were never going to drop a nuclear bomb. I hope not, but what is it there for," Tyler said.

"I want to make college debt-free and for families making less than $125,000, you will not get a tuition bill from a public college or university if the plan that I worked on with Bernie Sanders is enacted."

Clinton enhanced her college affordability plan with the Vermont senator, her rival in the presidential primaries, in an effort to win over his supporters. Bringing down college costs was a rallying cry for his younger supporters. It's also an issue increasingly discussed on the left.

Packer said this might be an area that both sides want to work on. "That strikes me as a thing that transcends ideology."