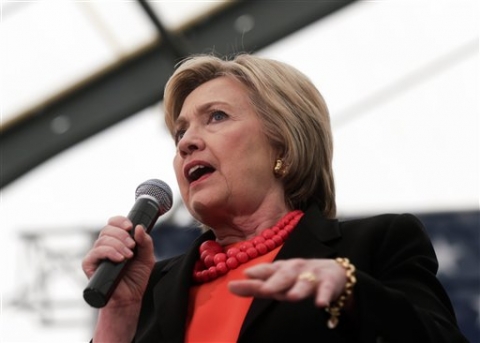 JENKINTOWN, Pa. (AP) — Hillary Clinton is vowing to address pay fairness for women if elected president, joining with women at a suburban Philadelphia cafe in the days before the Pennsylvania primary.

Clinton says she is excited that Harriet Tubman will eventually be on the $20 dollar bill but adds that it's "not enough to be on the money — you need to be making the money."

The Democratic presidential candidate is joined by Lily Ledbetter, the namesake of the fair pay law signed by President Barack Obama that aims to make it easier for women to sue over wage discrimination.

Ledbetter says the nation needs to "keep this going" and seek paycheck fairness.

By KEN THOMAS. Copyright 2016 The Associated Press. All rights reserved.
This material may not be published, broadcast, rewritten or redistributed.