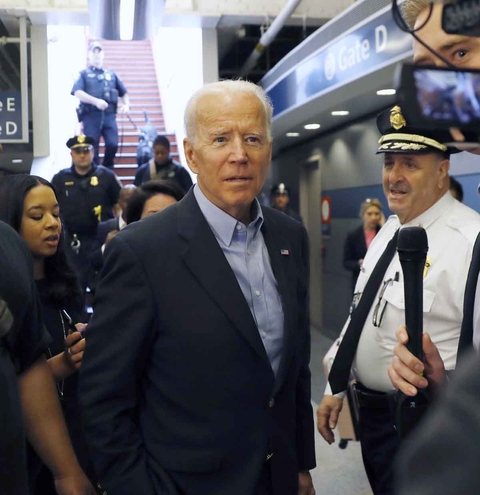 Former Vice President Joe Biden's announcement of a bid for the Democratic presidential nomination earned him an 11-point polling bounce, leaving him head and shoulders above the rest of the Democratic candidates.

A new CNN poll conducted by SSRS after Biden's announcement on Thursday shows 39% of voters who are Democrats or Democratic-leaning independents saying he is their top choice for the nomination, up from 28% who said the same in March.

That puts Biden more than 20 points ahead of his nearest competitor, Sen. Bernie Sanders of Vermont -- who holds 15% support in the poll -- and roughly 30 points ahead of the next strongest candidate, Massachusetts Sen. Elizabeth Warren (8%).

Warren ranks about evenly with South Bend, Indiana, Mayor Pete Buttigieg (7%), former Texas Rep. Beto O'Rourke (6%) and Sen. Kamala Harris of California (5%), who round out the list of those earning 5% or more in the poll. The remaining 17 candidates tested all held the support of 2% or less.

Biden's surge in support solidifies his status as the front-runner in a race that now has 20 candidates in the Democratic field. Biden's early campaign message has been centered around taking on President Donald Trump more directly rather than his Democratic counterparts -- and the President has noticed, spending time attacking Biden repeatedly on Twitter and Fox News in recent days. Biden also has highlighted his close personal ties to former President Barack Obama, releasing a campaign video on Tuesday that interspersed images of his vice presidency with Obama's remarks during his Medal of Freedom ceremony.

Still, only about a third of potential Democratic voters with a preference in the race (36%) say they will definitely back the candidate they currently support, 64% say they could still change their minds. Those who say they are locked in are more apt to back Biden: 50% in that group support him, 21% Sanders, 8% Warren.

When asked who in the field they'd most like to hear more about, aside from the candidate they currently support, the names which rise to the top largely match those near the top of the horserace. But the order is shuffled: Harris holds the top slot, mentioned by 23% of potential Democratic voters. Warren follows at 20%, Biden at 19%, Buttigieg at 17%, Senator Cory Booker and O'Rourke each land at 15% and 12% name Sanders.

Biden remains deeply popular among potential Democratic voters, according to the poll, with 81% saying they have a favorable view of the former vice president, exactly the same as when CNN last polled on his favorability rating in December.

All but 7% of Democrats and Democratic-leaning independent voters know Biden well enough to have an impression of him, but there's less certainty about the former Delaware senator's long record. Only half (49%) of potential Democratic voters say they know at least a fair amount about his positions as a senator, half (51%) say they know very little. Even among his current supporters, 40% say they know just a little or nothing at all about those positions. Younger Democrats are especially fuzzy on his record, with 62% of those under age 45 saying they know little or nothing about his record in the Senate.

Aside from Biden's rise, Buttigieg is the only other candidate who made meaningful gains compared with a CNN survey in March, climbing six points in support. Buttigieg's favorability rating among potential Democratic voters has also improved, from 11% favorable in late January following his announcement of a presidential exploratory committee to 38% now that he has announced a campaign; 12% now have an unfavorable view.

Biden's entrance into the race made for a field of 20 announced major candidates, with at least three more current officeholders strongly considering a run. And the poll finds the potential Democratic electorate is generally happy with their choices.

All told, 80% say they are satisfied with the massive field of candidates who are in the running for the Democratic nomination, 18% say they are dissatisfied. Women (85% satisfied) are more apt to express satisfaction with the field than men (74%), and self-identified Democrats (84%) are a bit more satisfied than independents who lean toward the party (71%).

Asked to rate the importance of several issue positions staked out by at least some of the candidates running for the Democratic nomination, potential Democratic voters are largely unified in considering it very important for the party's nominee to back aggressive action to slow the effects of climate change (82% "very important"); providing health insurance for all Americans through the government (75%); and taking executive action if Congress fails to pass stricter gun laws (65%).

Nearly half of potential Democratic voters say it is "extremely important" that a candidate has a good chance of beating Trump (46% said so) in making their decision about whom to support. That outpaced considerations about the candidate's experience (31% said it was extremely important that the candidate has the right experience to be president), willingness to work with Republicans to get things done (26%), how well a candidate represents the future of the Democratic Party (22%), positions on the issues (20% prioritized progressive positions, 20% consistency on the issues) or ability to bring an outsider's perspective to Washington (14%).

The CNN Poll was conducted by SSRS April 25 through April 28 among a random national sample of 1,007 adults reached on landlines or cellphones by a live interviewer. Results for the full sample have a margin of sampling error of plus or minus 3.8 percentage points, for the subsample of 411 Democrats and Democratic-leaning independents who are registered to vote, it is 5.9 points.