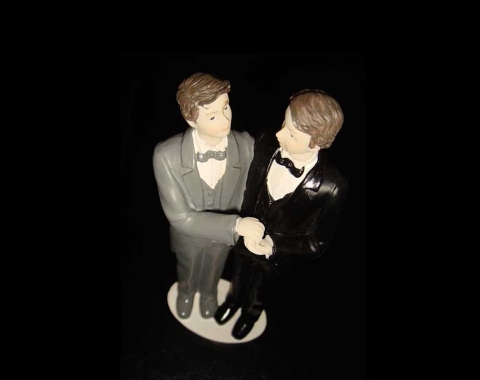 UPDATED: DENVER (AP) — The Colorado Supreme Court refused Monday to take up the case of a suburban Denver baker who would not make a wedding cake for a same-sex couple, letting stand a lower court's ruling that the Masterpiece Cakeshop owner cannot cite his Christian beliefs in refusing service.

"The highest court in Colorado today affirmed that no one should be turned away from a public-facing business because of who they are or who they love," Ria Tabacco Mar, staff attorney for the American Civil Liberties Union's LGBT Project who argued the case, said in a statement. "We all have a right to our personal beliefs, but we do not have a right to impose those beliefs on others and discriminate against them."

Tabacco Mar had argued on behalf of Charlie Craig and David Mullins, who had been refused service by baker Jack Phillips.

Attorney Nicolle Martin, who represents Phillips, said they had not yet decided whether to accept the ruling, ask Colorado's highest court to reconsider, or approach the U.S. Supreme Court. Martin says she is surprised the Colorado court would not consider the case.

"This is a matter that affects all Americans, not just people of faith," Martin said.

Phillips declined to make a cake in 2012 for Craig and Mullins, who were married in Massachusetts and planned a celebration in Colorado. The couple filed a complaint with the Colorado Civil Rights Commission, which ruled in December 2013 that Phillips discriminated against them and ordered him to change his store policy against making cakes for gay weddings or face fines. The Colorado Court of Appeals also ruled against him.

Phillips, who referred questions from The Associated Press to his lawyer on Monday, has said he has no problem serving gay people at his store, but that making a wedding cake for a same-sex wedding would violate his Christian beliefs.

Such issues have been considered by courts and legislators across the country. A new North Carolina law prevents local and state government from mandating protections for LGBT people in the private sector or at stores and restaurants. The law suffered a blow when a federal appeals court issued an opinion that threatens part of the law requiring students to use bathrooms in line with their gender at birth in public schools and universities.

Colorado lawmakers introduced a bill in February that would have blocked the state from taking any action that may burden a person's religious freedom unless it was the least restrictive means of furthering a compelling governmental interest. A House committee indefinitely postponed discussion on the bill.

Critics say the legislation that has been proposed in states across the country to protect those who — due to religious beliefs — decline to employ or serve certain people are aimed at the LGBT community and are discriminatory.

By DONNA BRYSON. Copyright 2016 The Associated Press. All rights reserved.
This material may not be published, broadcast, rewritten or redistributed.