Come out of the broom closet for Pagan Pride OKC 2014 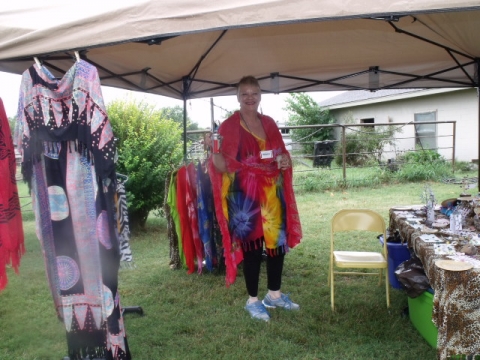 One of many colorful vendors at Pagan Pride OKC. Photo provided.

Oklahoma Pagans want anyone and everyone to come together to celebrate and share their brand of spirituality at this year’s Pagan Pride OKC, a day for fun and education about Paganism.

“One of the goals of the Pagan Pride Project is to help dispel fear in society of Pagans in general,” said Belinda Smith who is known simply as Becca in the Pagan Community. “We are everyday people - teachers, doctors, politicians, blue collar workers, white collar workers, [we’re] gay and straight - we have just chosen to worship/honor Deity in a way that is considered different from the ‘normal’ religions.

“We hope that the general public will take the time to come out and meet us; to learn that words like Heathen, Norse, Witch, etc. are not words used to instill fear but just another way of categorizing ourselves to others on the Pagan path, just as a Christian might use terms like Baptist, Catholic, Protestant.”

“If we don't come out of our ‘broom closets’ and let others know and learn about us they will always carry the images that the movie industry and authors have painted for them for ages. They have neighbors, co-workers and family members who have chosen to hide for fear of becoming shunned.”

The group has only been around for a couple of years in OKC, but they live, work, volunteer, vote, raise families and have made this corner of the world their home. Some literally live, “in the closet” from their Oklahoma [religious] families about practicing Paganism.

“We know people have pre-conceived ideas about us and [we] want to make this an opportunity to get the facts, meet us face-to-face, and celebrate the turning of the Wheel,” said Emmah Eastwind, Local Coordinator of OKC Pagan Pride Day. “We encouraging attendees to help us collect over 100 pounds of food for both people and pets which we'll be donating to Other Options [and Friends Food Pantry], a food bank and resource center for persons and families dealing with HIV and AIDS, and Pets & People of Yukon.

“This year we're excited to have a number of informative workshops, an arts and crafts contest, some wonderful entertainment, vendors, drum circles, and a walking labyrinth,” added Eastwind. “It’s a family event and we'll have a children's activity area. There will be three different types of rituals to demonstrate our spiritual observances. Participation is encouraged but not required.”

She added that Pagan Pride Day is held in OKC because it is centrally located, has the highest population of Pagans in the state and had enough people interested in forming a core committee to coordinate the event.

“Being a Pagan is a highly individualistic and celebratory spiritual path that might draw on any number of influences. Paganism is more of an umbrella term akin to Christianity,” Eastwind continued. “There are a lot of traditions (denominations) under the umbrella. Most are earth-honoring traditions either specifically or combining global influences such as Egyptian, African, European, Native American, etc. Most also contain magical-alchemical-metaphysical elements. We have spiritual observances generally on full or new moons, and eight times a year at the solstices, equinox and cross quarters between them, which we call the Wheel of the Year.”

Pagan Pride Day will feature classes, presentations, entertainment, public rituals, drum circles, vendors, readers and lots of fun. The organizers for this year’s Pagan Pride Day are made up of individuals from our Pagan Community as well as several Pagan groups (Crescent Moon Collective, Silver Serpent Coven, Art and Spirit Guild and OKC Witch Hat Society). This is a collaborative effort by members of the Oklahoma Pagan Community and anyone interested in helping is welcome.

by Robin Dorner, Editor in Chief