Committed to bringing the "Best of Broadway" to Tulsa 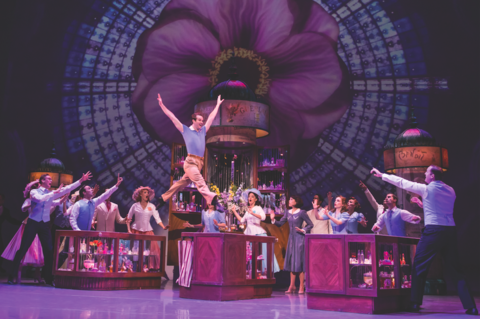 The cast of American in Paris. Photo provided.

This June, Celebrity Attractions brings the most awarded new musical of 2015, An American In Paris, to the Tulsa Performing Arts Center.

An American In Paris is the romantic story about an American soldier, a mysterious French girl, and an indomitable European city, each yearning for a new beginning in the aftermath of war. It was inspired by the Academy-Award winning film of the same name.

Directed and choreographed by 2015 Tony Award-winner Christopher Wheeldon, the show features the music and lyrics of George Gershwin and Ira Gershwin and a book by Craig Lucas.

“We set about making our version of the story, but we didn’t want to turn our backs on the movie completely,” says Wheeldon. “We were eager to make a show that would appeal to people who love the movie, but at the same time take those who hadn’t seen it on a different kind of journey.”

He continued, “The show is about the characters’ struggle to find life, to find love, to find happiness again after this dark period. Made in the early ’50s when the war was still very fresh, Paris was treated in a kind of hyper-unrealistic way.

Wheeldon says there was so much more they could do. We had the freedom to place Paris in a more realistic, historical context, and talk about what the city was like after the Nazis left, and how romance and art and music were a balm to the wounds.

“Paris behaves as a character in the show, and we see the city open up and breathe again and take on all the beautiful qualities that we associate with it.”

Wheeldon is one of the most sought-after choreographers in the world but had never directed on Broadway before. But lead producer Stuart Oken wanted a singular vision for the show.

“He felt that I would be able to bring a unique quality of movement to it,” says Wheeldon, “not only to the dancing but the transitions and the flow of the piece as a whole.”
Wheeldon was very much involved with the shaping of the show and the selection of the music.

He adds, “Then it was really about which pieces of music best told our story. We wanted it to feel like the Gershwin’s had written this music specifically for our show.”

The show features such classic songs as “I Got Rhythm,” “The Man I Love,” “Stairway to Paradise,” “But Not For Me” and “They Can’t Take That Away From Me.” There are numerous orchestral gems, including the lesser known Second Rhapsody and Cuban Overture.
An American In Paris won four 2015 Tony Awards, four Drama Desk Awards, four Outer Critics Circle Awards, the Drama League Award for Best Musical, three Fred and Adele Astaire Awards, and two Theatre World Awards and many more accolades.

Presented by Celebrity Attractions, An American In Paris comes to the Tulsa Performing Arts Center for eight performances only June 19 – 24. Performances are Tuesday, Wednesday and Thursday at 7:30 p.m., Friday at 8 p.m., Saturday at 2 p.m. and 8 p.m. and Sunday at 2 p.m. and 7 p.m.