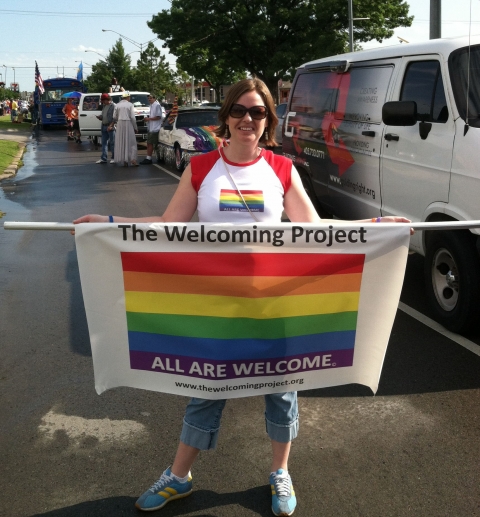 With a recognized need to increase the visibility of the LGBTQ community in their city, Merideth Worthen and Brian Eddins created The Welcoming Project (TWP) in 2011. Worthen wanted to make her town; Norman, OK, a more welcoming place to allow businesses, churches, and organizations to show their patrons that all are welcome, no matter their gender, sexuality, race, ethnicity, religion or other differences.

TWP offers free advertising and "All Are Welcome" rainbow signs to businesses, health care providers, organizations and churches in Oklahoma and across the world who wish to show that they are LGBTQ-friendly both on their websites and in their places of business.

“The Welcoming Project will award a $500 scholarship to an undergraduate student enrolled in a degree granting institution who provides an outstanding contribution to LGBTQ activism,” said Merideth Worthen, President of The Welcoming Project. “The award winner will be announced at our anniversary celebration in April, 2013 in Norman.”

Application can be found on The Welcoming Project website at www. thewelcomingproject.org. Application deadline is March 1, 2013.

Eddins is an instrumental part of TWP, working with businesses, as a board member for PFLAG and in other areas of the community. He has been in the Real Estate business since 2003 and works with Don Cies in Norman.

Worthen is also actively involved in the Sooner Ally Program, which is dedicated to helping LGBTQ students succeed at OU by making them feel safe, supported and included on campus.

“We need your donations to keep The Welcoming Project alive and flourishing,” added Worthen. “We are excited to see our visibility growing with more than 200 Welcoming Places throughout the world and media coverage on local newscasts, newspapers, blogs, and newsletters. But none of this could be possible without your support.”

You may make donations to TWP by mail or PayPal (www.thewelcomingproject.org/donations.php)

As a 501(c)(4) non-profit, all donations can be claimed as charitable deductions. Receipts will be emailed to all donors for your records.

Those interested in joining TWP can do so for FREE by signing up at www.thewelcomingproject.org.