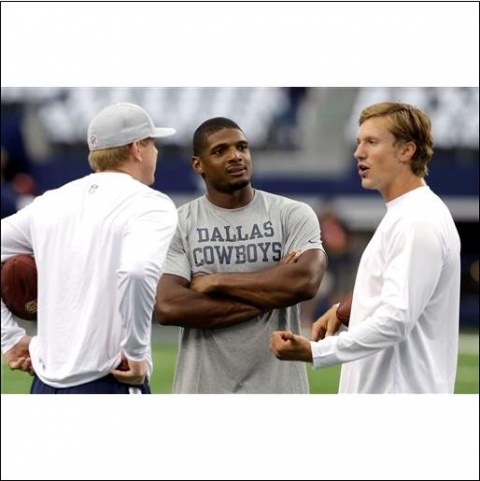 In this September photo, Dallas Cowboys' Michael Sam, center, talks on the field before the start of an NFL football game against the San Francisco 49ers in Arlington, Texas. (AP Photo/LM Otero, File)

Irving, Texas (AP) — Michael Sam will have to wait for a third team to give the NFL's first openly gay player a chance to appear in a regular-season game.

The Dallas Cowboys released Sam from the practice squad Tuesday, dropping the rush end as they prepare for several potential reinforcements to return to the defensive line.

Sam spent seven weeks with the Cowboys after joining their practice squad Sept. 3, four days after he was among the final cuts by the St. Louis Rams at the end of the preseason. He was never placed on the 53-man active roster.

The Rams drafted the former SEC defensive player of the year from Missouri late in the seventh round in May. He was pick No. 249 out of 256. Sam had three sacks in the preseason with St. Louis playing mostly against second- and third-stringers.

Sam thanked the family of Cowboys owner Jerry Jones on Twitter, along with "friends, family, teammates, and fans for their support."

"While this is disappointing, I will take the lessons I learned here in Dallas and continue to fight for an opportunity to prove that I can play every Sunday," Sam wrote.

The signing of Sam by the Cowboys brought an overflow crowd to coach Jason Garrett's daily news conference, and he was surrounded by about two dozen reporters in the only interview he conducted on the same day.

But he mostly blended in after that, making occasional appearances in the locker room when it was open to the media and earning praise from Garrett and defensive coordinator and defensive line coach Rod Marinelli the few times they were asked about him.

"Comes to work every day and practices hard," Garrett said last week. "One of 10 practice roster guys that we have, so he's working on his skills, trying to develop, but also doing a lot of other things. Playing offense, defense, playing the kicking game. That's what a lot of those guys do."

Sam came out to his Missouri teammates before his senior season, when he had 11 1/2 sacks. He told the rest of the world three months before the May draft. After Sunday's 31-21 win over the New York Giants, Cowboys owner Jerry Jones told USA Today that Sam's sexuality was "a dead issue."

The Cowboys (6-1), off to their best start since they were 12-1 in 2007, are playing their second straight NFC East opponent at home, with Washington (2-5) visiting Monday night.

The Rams didn't keep Sam because they had depth on the defensive front. The same situation is developing for the Cowboys, who are among the league's worst in sacks but have been getting solid production with a rotation in the front four of a defense exceeding expectations.

Dallas has rookie second-round pick DeMarcus Lawrence close to coming back after breaking his right foot in training camp. He was placed on short-term injured reserve and will be eligible to play next week against Arizona.

Veteran defensive end Anthony Spencer gets stronger each week in his return from microfracture knee surgery that sidelined him all but one game last season.

Defensive tackle Josh Brent, who is serving a 10-game suspension for his intoxication manslaughter conviction in the 2012 death of teammate Jerry Brown, returns to practice next week. He will be eligible to play Nov. 23 at the Giants.