Deaths and detentions in 'new wave of persecution' in Chechnya, say LGBT activists 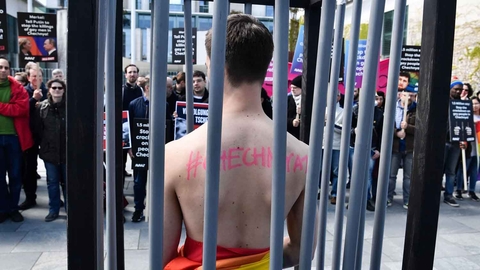 Dozens of people have been detained and at least two have died in custody,amid a fresh crackdown on LGBT groups in the Russian republic of Chechnya, activists said Monday.

Around 40 people -- both men and women -- have been detained in recent weeks in a "new wave of persecution," Igor Kochetkov, the head of rights group Russian LGBT Network, said in a statement.

He added that "at least two people died as a result of tortures." Kochetkov said the detentions were carried out by law enforcement officers, with victims held in the southern city of Argun.

"The local police make every effort to prevent victims from leaving the region or applying to the courts in the future," said Kochetkov.

"They take away documents, they [threaten] victims with criminal proceedings against them or their close ones, and they force them to sign empty forms."

CNN was not able to immediately verify those claims. Officials in Chechnya did not immediately respond to requests for comment.

According to the Russian LGBT Network, a fresh wave of detentions started in December following the arrest of an administrator of a group for gay men from the North Caucasus on the Russian social network VKontakte.

It follows a brutal crackdown on gay men in Chechnya in 2017, when hundreds of men were allegedly held and tortured in detention.

At the time, one witness who fled Chechnya after being arrested told CNN that hundreds of gay men like him were being rounded up by the authorities and held in appalling conditions in at least three detention centers.

The detentions prompted heavy international criticism of Russia. The country has a checkered record on gay rights, breaking up gay pride marches and even passing anti-gay propaganda laws.

But the allegations of detention camps and torture emerging from Chechnya were unprecedented. In response, Chechen leader and Kremlin-backed strongman Ramzan Kadyrov said there were no gay people in his republic, and that if there were any they should be taken away from the region.