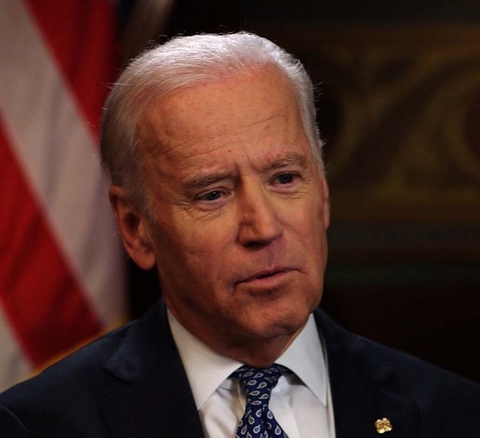 Former Vice President Joe Biden responded to criticism Thursday after he called Vice President Mike Pence a "decent guy" during a speech in Omaha, a comment that frustrated some on the left because of Pence's position on LGBTQ rights.

Biden's comments about Pence came as he discussed foreign policy and how the international community had reacted to Pence during the vice president's speech at the Munich Security Conference earlier in February.

"The fact of the matter is it was followed on by a guy who's a decent guy, our vice president, who stood before this group of allies and leaders and said, 'I'm here on behalf of President Trump,' and there was dead silence. Dead silence," Biden recounted Thursday at the Chuck Hagel Forum in Global Leadership at the University of Nebraska at Omaha.

The "decent guy" comment prompted a round of criticism on Twitter. Actress and activist Cynthia Nixon tweeted, ".@JoeBiden you've just called America's most anti-LGBT elected leader 'a decent guy.' Please consider how this falls on the ears of our community."

Shortly after his event ended, Biden responded directly to Nixon on Twitter:

"You're right, Cynthia. I was making a point in a foreign policy context, that under normal circumstances a Vice President wouldn't be given a silent reaction on the world stage," he said. "But there is nothing decent about being anti-LGBTQ rights, and that includes the Vice President."

This is not the first time Biden has referred to the vice president in that manner. At a rally in St. Charles, Illinois, last fall, Biden called Pence a "decent guy" but noted he doesn't agree with many of Pence's policies.

As Pence was transitioning into his role as vice president, Biden would speak with him from time to time to offer advice about foreign policy. Their last substantive conversation occurred in the summer of 2017, an aide to Biden said, but the two have crossed paths a few times at various events in DC, such as a swearing-in ceremony on Capitol Hill.

In Omaha on Thursday, Biden also referred to Secretary of State Mike Pompeo as a "good guy" as he talked about President Donald Trump's summit with North Korean dictator Kim Jong Un, saying, "The President treats everything like a real estate deal."

"I hope I don't come across as condescending, because I don't mean it. I hope the President has learned a really important lesson. Diplomacy matters. Preparation matters," Biden said.

Biden's event Thursday comes as he's inching closer to a decision on a possible 2020 presidential campaign. In Omaha, he did not make any comments about his thinking, but earlier this week in Delaware he revealed his family is on board with a run and that he is very close to making a decision.

"We are in the final stages of that decision, and -- it would be the greatest honor of my life to be president of the United States, but also it is something that I have to make sure I could run a first-rate effort to do this, and make clear where I think the country should go and how to get there," he said. "I have not made the final decision, but don't be surprised."

Biden's appearance in Omaha was to mark the inaugural Chuck Hagel Forum in Global Leadership. Biden has a close relationship with the Obama-era defense secretary, a former Republican senator from Nebraska who served alongside him on the Senate Foreign Relations Committee for more than a decade.

"Joe's a Democrat. I'm a Republican, but that never mattered to Joe," Hagel said as he introduced Biden. "He always understood that what matters most in public life -- as in all things in life -- is character. That public service is a privilege to be earned and it's its own best reward."