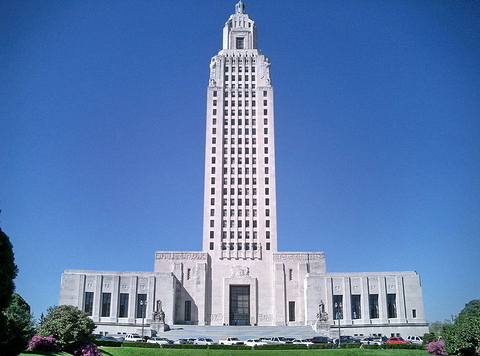 The ever-escalating argument between the two statewide elected officials, potential rivals in the 2019 governor's race, has stalled legal services and health insurance contracts, irritated lawmakers and intensified partisan divides at the Louisiana Capitol.

Edwards issued an executive order in April prohibiting discrimination in government and state contracts based on sexual orientation and gender identity, with an exception for contractors that are religious organizations. Landry says the order is unconstitutional because it seeks to establish a new protected class of people that doesn't exist in law and that lawmakers have refused to add.

Landry, a Republican, is seeking a court injunction blocking enforcement of the Democratic governor's LGBT-rights order.

"Through the guise of 'prohibiting discrimination,' the order imposes a political agenda and ideology upon thousands of people in the public and private sphere," Landry's lawyer Elizabeth Murrill wrote in a court brief.

Edwards defends his order as legal, and he accuses Landry of repeatedly outstripping his constitutional authority in trying to block compliance with the order. The governor wants the judge to uphold the anti-discrimination language while also "defining the role and authority" of the attorney general.

"On several occasions since taking office in January, the attorney general has challenged the authority of the governor to direct legal proceedings of the state and has significantly interrupted the ability of the state and its agencies to properly manage legal matters," Edwards lawyer Matthew Block wrote in court documents.

Landry has invoked his role as attorney general to block dozens of contracts containing the anti-discrimination language that state agencies would use to hire outside lawyers.

Medical malpractice cases are in limbo. Arrangements for legal work at the state elderly affairs office, the corrections department and other agencies are stalled. And House lawmakers allied with Landry recently refused to approve contracts to provide health insurance next year for 10,000 state employees, retirees and family members because the deals included the LGBT-protection clause. Without the deals, health plans that cover thousands of people could end Jan. 1.

Edwards sued Landry over the attorney general's refusal to approve the legal contracts containing the LGBT-rights language, but the governor lost in court, with the judge ruling Landry has discretion in how his office reviews the legal contracts.

The judge in that case wasn't asked about and didn't rule on whether Edwards' executive order is legal, the question Hernandez is now being asked to settle.

NOT THE FIRST FIGHT

Tensions have been escalating since Edwards and Landry each took office this year, with the attorney general asserting more authority than his recent predecessors — provoking frequent clashes with the governor.

Edwards calls it a power grab. Landry describes it as his constitutional charge as the state's top legal officer.

Landry sought his own separate budget bill with more freedom from the governor's oversight, a move Edwards called unconstitutional. The Senate sided with the governor and killed the idea. The two elected officials have also disagreed over pending lawsuits, spending plans and the flow of oil spill recovery money.

In a recent dispute over spending on Medicaid fraud investigations, Edwards and Landry negotiated a truce. But such instances are rare.

Fifteen House Republicans have filed a document with the court supporting Landry in his lawsuit against Edwards over the executive order. Several lawmakers have suggested they're tired of the repeated disagreements between the two statewide elected officials and hope a court ruling will help resolve some of the issues in the power struggle.