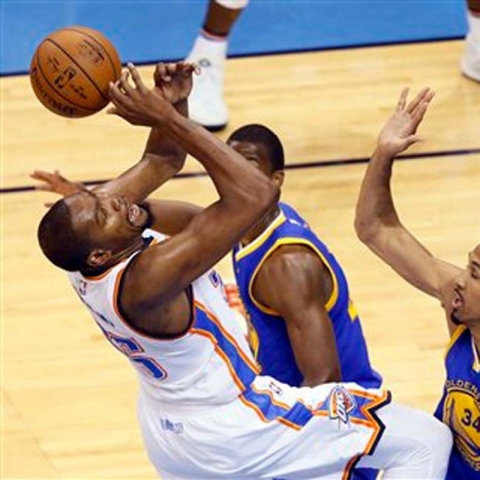 Oklahoma City (AP) — Kevin Durant, Russell Westbrook and the Thunder gave the Warriors as complete a beating as they experienced during their record-setting season.

Suddenly, a second straight title seems to be anything but a given for Golden State. Now the Warriors are just trying to survive.

Durant scored 33 points, Westbrook had 30 points, 12 assists and eight rebounds, and Oklahoma City rolled to a 133-105 victory on Sunday night to take a 2-1 lead in the Western Conference finals.

The Warriors, who set an NBA record with 73 victories in the regular season, trailed by 41 points, their largest deficit this season.

"We got what we deserved," Warriors coach Steve Kerr said.

Durant made 10 of 15 shots and Westbrook was 10 of 19. It was the first time this postseason both players shot better than 50 percent from the field.

"We're not going to win that way," Golden State guard Klay Thompson said. "One of those guys got to have an off night."

Serge Ibaka added 14 points and eight rebounds for the Thunder, who matched a franchise record for most points scored in a playoff game.

Westbrook said the Thunder also needed to make the hustle plays that add to the rebounding totals.

"That's one thing we slipped up on in Game 2, and I think tonight, we did a good job of getting loose balls and finding ways to get 50/50 basketballs and give ourselves extra possessions," he said.

Golden State will be in an uncomfortable position heading into Game 4 on Tuesday in Oklahoma City, but the Warriors remain confident. Golden State trailed Memphis and Cleveland 2-1 in playoff series last year and won both on its way to claiming the NBA title.

"Both times, we got blown out in Game 3, and we responded well, so we have that memory," Kerr said. "I'm confident we're going to come out and play a really good game in Game 4, and we'll see what happens."

The last time Golden State's Stephen Curry had played in Oklahoma City, he scored 46 points, tied an NBA record with 12 3-pointers and hit a game-winning, 37-footer. This time, the league MVP finished with 24 points on 7-for-17 shooting. Klay Thompson added 18 points on 8-for-19 shooting.

Golden State's Draymond Green, who kicked Oklahoma City's Steven Adams in the groin and has become Thunder fans' No. 1 target because of some questionable tactics, struggled on both ends of the floor and finished with six points on 1-for-9 shooting. The Warriors were outscored by 43 points when he was in the game.

With 5:57 left in the second quarter, Green kicked Adams after a foul. It was the second time in the series Green hit Adams there — he hit him with a knee in Game 2. The crowd chanted "Kick him out! Kick him out!" but Green was issued a flagrant 1 foul and remained in the game.

Seemingly energized after Green's foul, the Thunder outscored the Warriors 24-7 the rest of the half, with many of the baskets coming against Green. In a play that summarized the second quarter perfectly, Green went in for a layup and got it blocked by Durant, then Durant made a 3-pointer on the other end to give the Thunder a 64-47 lead.

The Thunder continued the onslaught by making 17 of 22 shots in the third quarter to take a 117-80 lead into the fourth.

The Warriors have left Thunder guard Andre Roberson open to focus on other players, and Roberson finally made the Warriors pay by scoring 13 points. He made 5 of 9 shots, including 3 of 5 pointers.

The Rev. Jesse Jackson attended the game and sat next to Durant's mother, Wanda Pratt.

Warriors: Had just one offensive rebound in the first quarter and 10 in the game. ... Made just 6 of 23 3-pointers in the first half and 10 of 33 overall. ... Never led by more than two points. ... It was the first time since 1991 that multiple players scored at least 30 points against the Warriors in a playoff game.

By Cliff Brunt, AP Sports Writer. Copyright 2016 The Associated Press. All rights reserved. This material may not be published, broadcast, rewritten or redistributed.