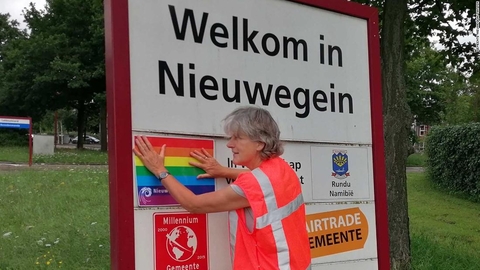 A city in the Netherlands has severed ties with its sister city in Poland after the latter declared itself an "LGBT-free zone."

Nieuwegein, a city near Utrecht in central Netherlands, released a statement announcing the immediate end to its friendly relationship with the Polish city of Pulawy on Wednesday.

The Nieuwegein City Council called on the municipal executive council to sever ties on July 13 after becoming aware of recent reports on the treatment of members of the LGBT community in Pulawy.

"In Nieuwegein everyone is allowed to be who he or she is, regardless of his or her sexual orientation, gender, religion or ethnic origin," said alderman Marieke Schouten.

"LGBT-free zones like Pulawy are really unacceptable as far as we're concerned."

Nieuwegein council was made aware of Pulawy's declaration in January, said the statement, and sent a letter to its counterpart in the spring to express its concern. However, local authorities in Pulawy did not reply, the statement added.

"For the city council and the college, enough is enough," reads the statement.

"A friendship between cities is precisely what should give room for dialogue on these issues. It is a pity that Pulawy does not want a conversation," said Schouten.

"I am glad that the city council draws a clear line and thus clearly speaks out in favor of inclusiveness."

While Polish attitudes toward homosexuality are slowly progressing, same-sex marriage is not legal and the overwhelmingly Catholic country remains one of the most conservative and restrictive in Europe for LGBTQ people.

The stickers featured an image of a black cross over a Pride flag alongside the inflammatory slogan.

These zones have since been declared in a number of towns across Poland, according to the International Observatory of Human Rights.

"Since last year, one-third of Polish towns -- reportedly an area bigger than Hungary -- have declared themselves 'free from LGBTI ideology,' with a rise in LGBTI people wanting to leave for nations with a relatively safer situation," wrote the organization in March.

And the country's incumbent president Andrzej Duda won another term in office on July 13 after speaking out against LGBTQ rights on the campaign trail.

Duda, backed by the nationalist ruling Law and Justice (PiS) party, at one point described LGBTQ rights as an "ideology" worse than Soviet-era communism.

During campaigning, Duda sought to mobilize his more conservative, largely rural base with appeals to traditional Catholic values and a promise to maintain popular social welfare policies, such as a child allowance and lower pension age.