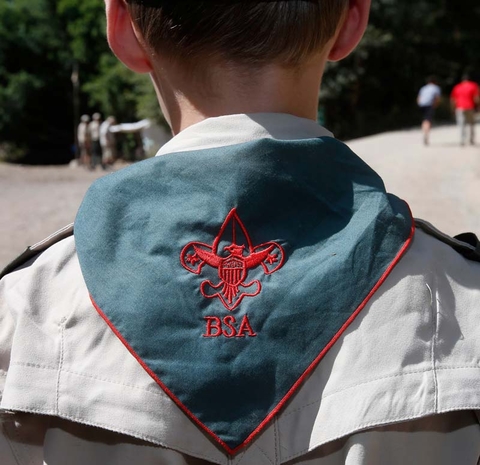 In 2013, the Boy Scouts of America voted to end its ban on openly gay youth. George Frey, Getty Images.

These days, it feels like there's a petition for every cause imaginable.

But some petitions are more successful than others.

The petition-hosting site Change.org considers a number of factors in determining which had the biggest impact: the number of people who signed, the zeitgeist and the conversations sparked and whether anything changed as a result, said Michael Jones, the platform's managing director of campaigns.

"People really see online petitions as a tool to help them fix something that is systemically broken," Jones said.

Over the past decade, people took to Change.org to raise attention to criminal justice issues, honor community heroes and challenge pharmaceutical companies and other businesses.

These are 10 of the biggest victories, according to Change.org.

After 17-year-old Trayvon Martin was was killed on February 26, 2012, his parents Tracy Martin and Sybrina Fulton started a petition calling for the arrest of George Zimmerman, the neighborhood watch leader who shot him.

More than 2.2 million people signed in support of the cause. Within a week, it had become the one of the most popular petitions in the website's history, with 877,110 signatures.

The local tragedy soon became an international movement. Civil rights activists, politicians and protesters rallied behind Trayvon's family and took to the streets to demonstrate against his killing.

In April 2012, Change.org declared the petition a victory after a Florida state attorney announced that charges of second-degree murder would be lodged against Zimmerman.

Zimmerman was acquitted in 2013. But Trayvon's death forced a conversation about police brutality and inequality and helped give rise to one of the most prominent movements of the decade: Black Lives Matter.

Zimmerman is now suing Trayvon's parents, prosecutors and state authorities, alleging there was a conspiracy to frame him and demanding more than $100 million in damages.

Trayvon's parents and their attorney called the lawsuit "unfounded and reckless."

The PACT Act had come extremely close to becoming law in 2017. Though the Senate passed it unanimously, it stalled in the House.

Nearly 800,000 people signed the petition and in November, the Senate passed the bipartisan legislation that the House had approved a month earlier.

US Rep. Ted Deutch of Florida credited Helfand, in part, for the bill's success. President Donald Trump signed the PACT Act into law.

As the trial of Casey Anthony, who was accused of killing her 2-year-old daughter Caylee in 2008, played out in 2011, a petition called for the creation of Caylee's Law, which would make it a felony for a parent of a guardian to fail to report a missing child if the child could be in danger.

It was one of the first petitions of the decade to go viral, Change.org says, ultimately attracting more than 1.3 million signatures.

At least 10 states since then have passed versions of Caylee's Law. Critics say the laws would negatively affect mostly innocent parents who may be grieving the tragic loss of a child.

Death row prisoner Rodney Reed was sentenced more than 20 years ago for the 1996 murder of 19-year-old Stacey Stites in Bastrop, Texas.

Reed says he is innocent, and attorneys from the Innocence Project say they have evidence that exonerates him. The lead prosecutor in his case maintains that he is guilty.

Reed was scheduled to be executed on November 20. But in the weeks leading up to that date, outcry to stop the execution grew from supporters, including celebrities, clergy and lawmakers.

More than 2 million people signed a petition at freerodneyreed.com, and a petition on Change.org garnered more than 300,000 signatures.

Days before he was scheduled to die, the Texas Court of Criminal Appeals blocked Reed's execution, allowing a lower court to consider additional evidence.

After West Coast rapper and activist Nipsey Hussle was killed in 2019, Najee Ali, a community organizer, and Los Angeles resident, called on a city councilman to name an intersection for the artist.

More than 500,000 people signed the petition in the days after Nipsey's death. Less than two weeks later, the Los Angeles City Council voted unanimously to rename the intersection of West Slauson Avenue and Crenshaw Boulevard in South Central Los Angeles as "Nipsey Hussle Square." It's the site of Nipsey's Marathon Clothing store, near where he was fatally shot.

Getting TripAdvisor to address sexual assault

After a woman who goes by "K" said she was sexually assaulted by a tour guide who worked at a business promoted by TripAdvisor, she contacted the website in an effort to warn other tourists, The Guardian reported in March.

But the company suggested that she leave a review about the incident, K said in a Change.org petition. When she wrote a review, TripAdvisor did not publish it because it wasn't written as first-person account, according to The Guardian.

With the help of the Change.org team, K started a petition demanding that TripAdvisor "stop covering up sexual assaults," calling on the company to do more to warn users about businesses where assaults had been reported.

The petition received more than 500,000 signatures in the weeks after, and TripAdvisor announced changes to how it handles reviews and reports of sexual assault. But K and other activists maintained that the company still hadn't gone far enough.

After protests outside TripAdvisor's New York offices and continued pressure, the company announced further changes to its policies, including commitments to partner with sexual assault support groups.

In June, K declared that the petition had been successful.

"With these updates, TripAdvisor has shown that they are committed to both improving the experience for survivors and providing people with the information they need to travel safely," she wrote. "I'm thrilled to declare our campaign a victory."

After 12 years as a Scout, Ryan Andresen was told by his Boy Scout troop in the San Francisco Bay Area in 2012 that he couldn't receive the Eagle Scout award, the highest rank in the organization.

The reason? Because he had come out as gay.

In a historic decision in 2013, the Boy Scouts of America voted to end its ban on openly gay youth. But it wasn't until 2015 that the organization announced it would lift its ban on gay adult leaders.

When she was 16 years old, Cyntoia Brown was tried as an adult and sentenced to life in prison for killing a man who had bought her for sex.

Years after her sentencing, her case gained widespread attention and inspired the viral hashtag #FreeCyntoiaBrown after A-list celebrities like Rihanna and Kim Kardashian West publicly advocated for Brown's release.

In 2018, the Tennessee Supreme Court ruled that Brown must serve at least 51 years in prison before she would be eligible for release. After that ruling, a petition on Change.org called for then-Gov. Bill Haslam to grant her clemency.

He did so in January, and Brown was released from prison in August at the age of 31.

Restarting production of a cancer drug

In July, Teva Pharmaceuticals announced it had made a "business decision" to discontinue Vincristine -- a drug used to treat childhood cancers including leukemia, lymphoma and brain tumors.

Childhood cancer survivor and pediatric oncology nurse Liliana Haas said the drug helped save her life and the lives of many children she works with each day. So, she took to Change.org in October to demand that the pharmaceutical company bring the drug back.

More than 215,000 people signed the petition, and the issue garnered national media attention. In November, Teva Pharmaceutical responded directly to Haas' petition and announced it would again start producing the life-saving drug.

Five years after a New York Police Department officer was accused of fatally choking Eric Garner, the Justice Department announced it would not bring charges against him.

The petition received more than 144,000 signatures. Protesters interrupted the Democratic presidential debate in July to call attention to the issue, and New York Mayor and then-presidential candidate Bill de Blasio was asked why Pantaleo was still on the force.

In August, New York Police Commissioner James O'Neill fired Pantaleo. He is suing to get his job back.