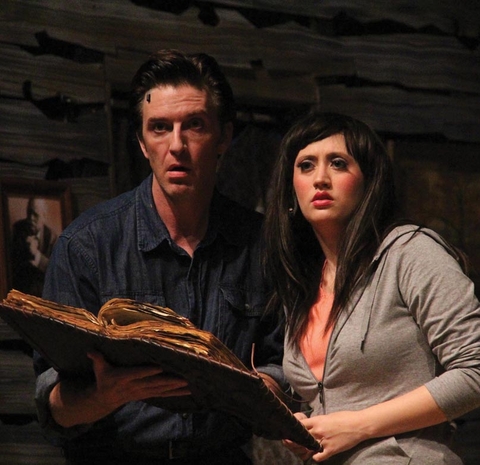 Veteran “dead-ites” and Evil Dead virgins will have the time of their lives when Evil Dead: The Musical returns to the Pollard Theater stage complete with Splatter-Zone. The show opens October 11 and runs through November 2, as the second production of the company's 33rd Season.

Evil Dead: The Musical tells the tale of five college kids who travel to an “old abandoned cabin in the woods” and accidentally unleash an evil force. While Evil Dead: The Musical may sound like your typical horror story, it's so much more. The songs are hilariously campy, and the show is bursting with more broad humor than a Monty Python sketch.

Based on the Sam Raimi’s 1981 cult classic, Evil Dead: The Musical brings a hilarious mix of rock ‘n roll demons, blood, dancing zombies, more blood, and an unforgettable good-time together in one show.

Despite the continued nation-wide success of Evil Dead: The Musical, the Pollard had long considered whether or not to revive the popular production, but the local audiences' demand was the deciding factor in the Pollard’s decision.

“We try not to revive shows constantly, but the Evil Dead audience is so completely devoted to it, that it was simply impossible to overlook,” remarked Pollard Artistic Director W. Jerome Stevenson. “We love getting new audiences engaged in the theatre and, I hope that they further their devotion to the theatre and the Pollard because of Evil Dead. That would be the ultimate sign of the show’s impact.”

With veteran Oklahoma City actor Wil Rogers returning to the production in the pivotal role of Ashley “Ash” Williams, the Pollard has assembled an extraordinary cast of actors to make this production a campier good time than ever before.

Megan Montgomery (Beehive: The ‘60s Musical) and Jon-Philip Olson revive their respective roles of Linda and Jake from the original 2014 production. They’re joined by familiar Pollard performers Ian Cummings (American Idiot) as Scott, Kristen Küns (Hairspray) as Cheryl, Laura Renfro (Bring It On: The Musical) as Allie/Shelly and Kaleb Bruza (Laughter on the 23rd Floor) as Ed.

“There are several reasons I wanted to do this show again, but the most important is I hope to create a staple for the Pollard,” commented Blount. “You can't see Evil Dead everywhere, and I think the Pollard productions complete with blood splatter are a unique theatrical event. I hope it’s one that generates an even stronger audience so that we can keep bringing it back. I want Halloween to become synonymous with Evil Dead at the Pollard.”

Evil Dead: The Musical runs October 11 through November 2 at the Pollard Theater in Guthrie. Tickets are $30 with senior, military, and student discounts available; no discounts are offered for the Splatter-Zone.

Performances are Fridays and Saturdays at 8 pm, and Thursday, Oct. 31 at 8 pm. The show will offer no matinee performances. Tickets are available online at www.thepollard.org, by phone, (405) 282-2800 or at the Pollard Box Office at 120 W. Harrison Ave., Guthrie, Oklahoma. Splatter-Zone tickets are also available online for purchase.