Experience magic unlike any other with The Nutcracker this holiday season 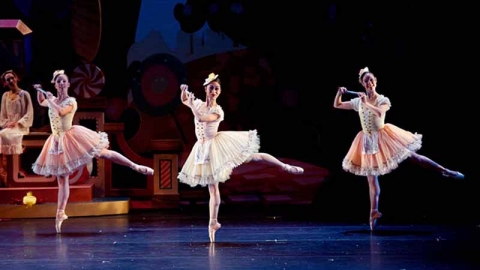 "The Nutcracker" can sweep you off your feet this holiday season as it performs in Missouri, Arkansas, Oklahoma and Kansas. Photo provided.

The Nutcracker, a timeless holiday classic, follows Clara Stahlbaum and her toy Nutcracker from an extravagant Christmas party to a fierce battle with the evil Mouse King, then on a magical journey through the Land of Snow and Kingdom of Sweets.

The action opens with a gala Christmas Eve party at the Stahlbaum home, filled with gaiety, family and friends. Clara’s godfather presents her with his Christmas gift, a Nutcracker doll. After the guests have departed, Clara returns to the Christmas tree, where she falls asleep with the Nutcracker in her arms.

As the clock strikes midnight, strange things begin to happen. Clara shrinks as the tree grows high over her head. Mice begin to fill the room, and the Nutcracker grows to full-size. Clara finds herself in the midst of a battle between an army of mice, and an army of gingerbread soldiers led by the Nutcracker. The Mouse King corners the Nutcracker, who is wounded. Clara throws her slipper at the Mouse King who is distracted long enough for the Nutcracker to stab him.

The mice retreat and the Nutcracker transforms into a handsome Prince. He leads Clara through the moonlit night to a pine forest in which snowflakes dance around them, beckoning them on to his kingdom.

Audience members young and old alike have made The Nutcracker a holiday tradition for many generations.

The Nutcracker is a two-act ballet, originally choreographed by Marius Petipa and Lev Ivanov with a score by Pyotr Ilyich Tchaikovsky (Op. 71). The libretto is adapted from E.T.A. Hoffmann's story The Nutcracker and the Mouse King. It was given its première at the Mariinsky Theatre in St. Petersburg on Sunday, December 18, 1892.

The Nutcracker has enjoyed enormous popularity since the late 1960s and is now performed by countless ballet companies, primarily during the Christmas season, especially in the U.S. Major American ballet companies generate around 40 percent of their annual ticket revenues from performances of The Nutcracker.

Release your inner child. Find a performance of The Nutcracker in your area.

Little Rock: Ballet Arkansas presents The Nutcracker December 11-13, at the Maumelle Performing Arts Center. Tickets are $20 to $52, and are available through the Arkansas Symphony Orchestra website, www.arkansassymphony.org, by phone at (501) 666-1761 or in person at 2417 N. Tyler Street, in Little Rock.

Springfield: Springfield Ballet produces two ballets each season, including Springfield’s only production of The Nutcracker each December. This is the 30th anniversary of their annual production. Performances of The Nutcracker will be December 17-20 at The Landers Theatre. Tickets are $26 and $28 with discounts for Students, Senior, Military, and Children, and may be purchased at The Landers Box Office, 311 E. Walnut St., by phone at (417) 869-1334 or online at www.springfieldballet.org/the-nutcracker or www.LandersTheatre.org.

Kansas City: Prepare to be dazzled by Kansas City Ballet’s The Nutcracker as you’ve never seen it before! The classic has been completely reimagined with exquisite costumes by Holly Hynes, grand new sets by Alain Vaës and new choreography by Kansas City Ballet Artistic Director Devon Carney.

Topeka: Ballet Midwest performs The Nutcracker December 11, 12 and 13 at the Topeka Performing Arts Center. Tickets are $18 for adults, with discounts for seniors, students and children, or $50 for a family pack of four (two adults, two students). Tickets may be purchased at Barbara’s Conservatory of Dance (home of Ballet Midwest) at 4300 SW Huntoon (call (785) 272-5991 in advance if you plan to purchase in person), and at Ticketmaster Outlets or at the Topeka Performing Arts Center box office.