Fueled by protest, liberals push for blockade of Trump picks 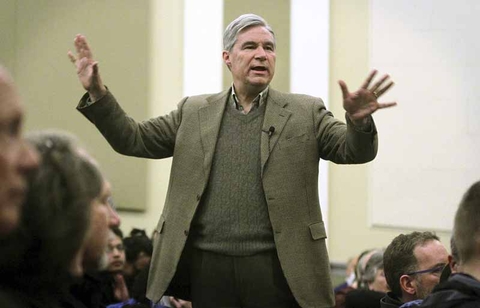 Democrats are racing to respond to the wave of liberal outrage triggered by President Donald Trump, jumping into protests, organizing rallies and vowing to block more of the new president's nominees. AP photo by Kris Craig.

WASHINGTON (AP) — Democrats are racing to respond to the wave of liberal outrage triggered by President Donald Trump, jumping into protests, organizing rallies and vowing to block more of the new president's nominees — including, possibly, his pick for the Supreme Court.

Those steps may not be enough to satisfy their increasingly aggressive party base.

Following a second weekend of protests, a growing number of liberal leaders are demanding a filibuster of Trump's pick for the high court, setting the party on a path of fierce opposition to Trump and potential confrontation with their own elected officials.

"I hope Democrats will stand up and use every tool in their toolbox including a filibuster," said former Labor Secretary Tom Perez, one of the top candidates to be the chairman of the Democratic National Committee.

But Senate Democrats remain wary of a total blockade, arguing the party should hold off making a decision until it can assess the choice. Trump says he will announce his nominee Tuesday evening.

"I want to make sure we thoroughly review the record and then go forward," said Sen. Bob Casey, D-Pa., who faces re-election in 2018. "We'll need to do a lot of work on any of them."

In the weeks after Trump's election, Democrats debated whether the party should work with the new president on discrete policy initiatives, like infrastructure, or present a wall of opposition. As protests sprang forth across the country, their furious constituents have made it clear they're demanding nothing short of complete resistance.

Last week, Massachusetts Sen. Elizabeth Warren faced an outpouring of anger after she cast a committee vote for Ben Carson, the former Republican presidential candidate nominated to be secretary of Housing and Urban Development. She was forced to explain her position in a Facebook post that began: "OK, let's talk about Dr. Ben Carson."

And more than 3,500 people have signed up on Facebook to march across Brooklyn to Senate Democratic leader Chuck Schumer's home Tuesday night to protest his support for three of Trump's Cabinet nominees.

"We need Senate Democrats to do everything in their power to shut down business as usual in the Senate," said Anna Galland, the executive director of Moveon.org, a liberal group that's been involved in organizing weekly anti-Trump protests.

The national party hopes to ride the energy of airport protests, women's marches and dozens of other actions across the country to electoral victories in governor races this year and next year's congressional midterms.

Democratic lawmakers and leaders joined protests at airports across the country this weekend, delivering impromptu speeches and working with lawyers to negotiate legal access for detained travelers impacted by Trump's temporary travel ban. Schumer said he'd vote against eight of Trump's Cabinet picks. And congressional leaders scrambled to put together a Monday night rally on the steps of the Supreme Court. And

Trump slammed the event in a Tuesday morning tweet, calling it "(a mess) - just like Dem party!"

Schumer shot back: "President Trump should learn that name calling is not going to solve the many problems this administration has already brought upon itself," said spokesman Matt House.

The coming fight over the Supreme Court could mark the biggest showdown between Washington Democrats and their restive party base. Unlike Cabinet nominees, which can pass the Senate solely with GOP votes, any senator can demand the Supreme Court nomination meet a 60-vote threshold — forcing Republicans to find support from at least eight Democrats.

So far, Schumer has refused to commit to a filibuster. But the decision may not be up to him, as any senator can move to try and block a Supreme Court nomination.

Oregon Sen. Jeff Merkley, a Democrat, indicated Monday that he would make such a move, sending out a fundraising email that asked people to sign a petition saying "the Senate must oppose" Trump's nominee.

Many in the party remain furious that Senate Republicans refused to even consider Obama's nominee to the court during the final year of his second term.

"If the Democrats do anything other than filibuster any pick, then what we're saying is that Republicans can literally steal a Democratic appointment and there's not going to be any repercussions for it," said Rep. Keith Ellison, D-Minn., another top candidate to chair the party.

Some Senate Democrats argue they have a responsibility to act in what they view as a more responsible manner.

Republicans, meanwhile, see an opportunity to score political points in next year's midterms. Conservative groups are planning to spend millions pressuring Senate Democrats to confirm Trump's nominee, with a heavy focus on Democrats up for re-election in Missouri, North Dakota, Montana and Indiana — states won overwhelmingly by Trump.