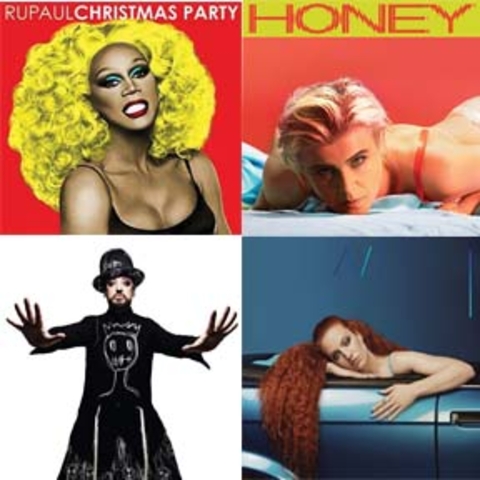 Swedish pop star Robyn’s newest album is her first since 2010’s critical and fan favorite Body Talk. Honey begins with lead single Missing U, a thumping slice of heaven that would have fit well on that record. Because It’s In the Music is a disco-lite daydream with its flourishes and undeterred bassline. Baby Forgive Me climbs a slow hill, never really picking up steam, but teasing it just past the midpoint.

The album’s centerpiece Send To Robin Immediately starts with several refrains of “Baby forgive me,” picking up where the aforementioned previous track left off, before ascending into a shuffling house track. Much of the album feels like some sort of trippy lowkey house session.

This album is understated when compared to her previous output. Honey is neither as sonically innovative nor as lyrically deep as her earlier work but is nonetheless a solid album from a beloved pop icon.

On the group’s first collective effort since 1999’s Don’t Mind If I Do, George O’Dowd and company deliver a strong and succulent album replete with their signature sounds, but one which also sounds fresh and modern.

Opener God & Love slinks over a hypnotic electro-drone, while Bad Blood gets toes tapping with a sick bassline and George’s still honey-smooth vocals singing, “Bad blood drippin’ on your dancing shoes.” There are plenty of typical reggae and funk influences, a constant hallmark since the group’s inception.

True to form, George tackles the familiar territory of universal love and acceptance and the championship of the underdog, while also namedropping Michelle Obama.

Life reaches high and wide and succeeds. It is an overall celebratory affair, with just the right number of sugary ballads to showcase George’s golden voice. A very strong entry in their long and storied career.

Christmas Party is a mix of original holiday songs and interludes that – as of the time of this writing – seem to indicate that this release will be tied into the upcoming Drag Race Christmas special, in which 8 queens will reunite in the Werk Room for a one-off special to crown the first Drag Race Christmas Queen.

While nebulously holiday-themed, the album as a whole serves a bit less of a traditional winter holiday album than simply the soundtrack to the special above. However, it does serve as a campy and festive entry into Ru’s oeuvre.

Jess Glynne: Always In Between

On the follow up to her 2015 debut I Cry When I Laugh, English singer-songwriter Jess Glynne delivers more of her soaring vocals and upbeat lyrics on tracks like strong lead single I’ll Be There. She serves more of her trademark blend of feisty soul and danceable pop on a strong sophomore release.

Glynne is like a one-woman rooting crew for herself, and anyone who needs words of encouragement. On Thursday, she sings “I don’t wear makeup on Thursday, ‘cause who I am is enough.” She has a knack for channeling heartache and uncertainty into reassuring affirmations, allowing the listener to work through their demons along with her but never to succumb to them.

Always In Between is representative of modern soulful pop; pristine and well-formed. The album is almost too good, but perhaps the songs that made the final cut were simply all the stellar options. In any case, there are no duds here.