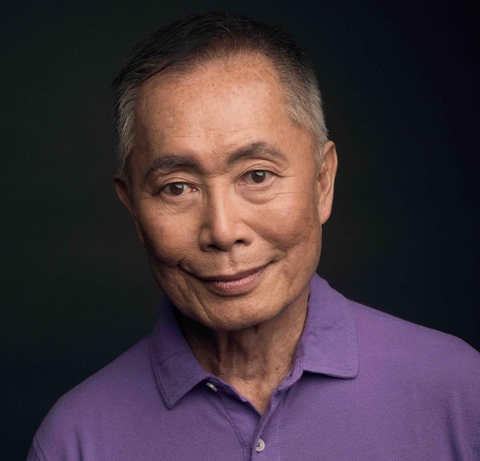 The award will be presented at the PFLAG Gives Thanks reception, which will take place in New York City on Monday, November 18.

The Betty DeGeneres Advocate Award honors a person who uses their visibility to help advance PFLAG’s vision of a world where diversity is celebrated and all people are respected, valued, and affirmed inclusive of their sexual orientation, gender identity, and gender expression.

The award is named in honor of DeGeneres, mother of Ellen DeGeneres, a longtime member of PFLAG who has used her public stature to educate about the vital role PFLAG plays in providing parent, family, and ally support and affirmation of people who are LGBTQ+.

Takei is known around the world for his role in the acclaimed original TV series Star Trek, in which he played Hikaru Sulu, helmsman of the Starship Enterprise. But Takei’s story, which includes an acting career that spans six decades, goes where few have gone before.

From a childhood spent with his family wrongfully imprisoned in Japanese American internment camps during World War II to becoming one of the country’s leading figures in the fight for social justice, LGBTQ+ rights and marriage equality, Takei remains a powerful voice on issues ranging from politics to pop culture.

It is Takei’s strong advocacy—and his ability to reach across a diversity of identities to bring people along in the conversation around LGBTQ+ equality—that made him the natural choice for this year’s honors.

“I am proud and honored to receive the Betty DeGeneres Advocate Award from PFLAG, an organization that has done so much to move equality forward for LGBTQ+ people over the last 46 years,” said Takei. “I’m especially grateful for their work within the API community, and their commitment to supporting people of Asian and Pacific Islander descent with chapters dedicated specifically to those families.”

PFLAG National is strongly committed to elevating the voices of people of Asian and Pacific Island descent, particularly those who are—or love someone who is—LGBTQ+. Takei has long served as a beacon of hope for these PFLAG families, including those who participate in the PFLAG chapters in Southern California and New York dedicated entirely to this community

“When my son came out as transgender, I first turned to PFLAG for support,” said Marsha Aizumi, a PFLAG parent, member of the PFLAG National Board of Directors, and a founder of PFLAG San Gabriel Valley API. “I then looked for role models in my community, as a person of Japanese descent. Mr. Takei's visibility as an openly gay Japanese man was crucial in my family's journey of love and unconditional support of our child.

“I am so grateful that PFLAG National will honor Mr. Takei for his incredible work. His visibility and voice have changed lives, saved lives, and brought hope to the hearts of so many.”

PFLAG Gives Thanks will be Monday, November 18, at 6:30 PM at the New York offices of PFLAG National Platinum Partner KPMG.

PFLAG is the first and largest organization for lesbian, gay, bisexual, transgender, and queer (LGBTQ+) people, their parents and families, and allies. With over 400 chapters and 200,000 members and supporters crossing multiple generations of families in major urban centers, small cities, and rural areas across America, PFLAG is committed to creating a world where diversity is celebrated and all people are respected, valued, and affirmed. To learn more, visit pflag.org, like us on Facebook (/pflag), or follow us on Twitter (@pflag) or Instagram.