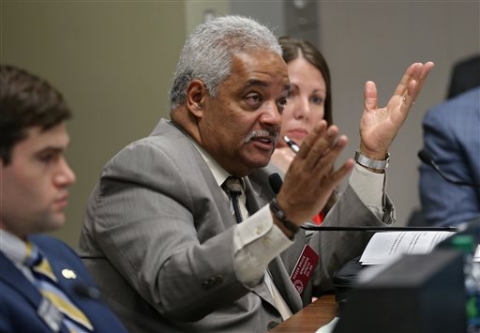 A House panel has approved the bill stating that religious officials don't have to perform same-sex marriages, a protection some believe is already guaranteed by the U.S. Constitution. (Bob Andres/Atlanta Journal-Constitution via AP)

The "Pastor Protection Act," the first of several proposed religious exemptions for opponents of the marriages to gain any traction this year, won approval Thursday in a House Judiciary subcommittee and was sent on for a full committee vote.

At least 8 bills filed by lawmakers would grant a variety of exemptions for people who object to same-sex marriage— including one measure allowing private business to refuse participation in a same-sex wedding ceremony.

House Speaker David Ralston, the chamber's top Republican, has thrown his support behind the Pastor Protection Act, recently calling it an opportunity to "come together" on a heated issue that has divided Republicans.

"It should be very clear they're protected criminally and civilly from making decisions and then being sued for those decisions," Tanner said.

The measure approved by a subcommittee Thursday also would allow religious organizations to prevent property from being used for purposes "objectionable" to religious beliefs.

Gay-rights supporters question that portion of the bill, arguing it could let nonprofits connected to churches limit access to housing, food pantries or other services but continue to receive federal or state tax dollars without meeting nondiscrimination requirements. Rep. Stacey Evans, D-Smyrna, tried Thursday to limit that section of the bill to wedding ceremonies, arguing that the change would "keep us out of the news."

"This keeps the message clear that we are simply trying to protect pastors and we are absolutely, in no way, shape or form attempting to discriminate against any citizen of the state," Evans said.

Georgia's business community has warned that any legislation viewed as discriminatory could result in economic backlash — like the social-media driven boycotts that followed Indiana's 2015 passage of a religious freedom law.

Evans later withdrew her change and agreed to talk about the issue more in the full judiciary committee. Lawmakers aren't in session Friday, returning to the Capitol next week.

By Kathleen Foody, AP. Copyright 2016 The Associated Press. All rights reserved. This material may not be published, broadcast, rewritten or redistributed.
The Gayly - 2/6/2016 @ 6:06 p.m. CST