Ginsburg has made an indispensable contribution to our democracy 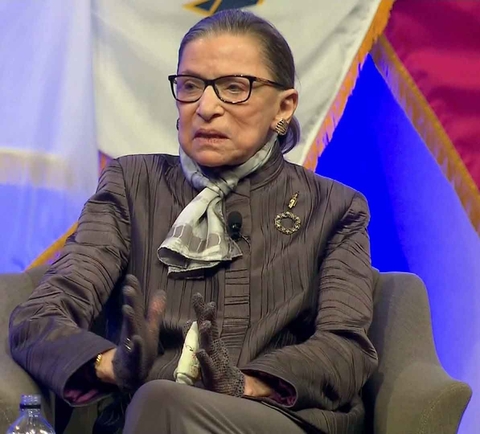 In 1972, I was asked by the ACLU to direct the Women's Rights Project with then-Professor Ruth Bader Ginsburg. As we began to work together, I was struck by her tireless commitment to fight in the courts for women's equality.

Every morning she would call me to find out if I had read the day's "advance sheets" that reported daily court decisions. As we prepared to file briefs, she would work around the clock to make sure every word was exactly what she wanted.

I sat at the counsel table with her as she argued the Frontiero case before nine male justices. Sharron Frontiero, an Air Force officer, was suing the federal government because she had been denied housing and medical benefits for her husband that would have automatically been provided if she had been a male officer with a wife.

Ginsburg had memorized the argument, as well as the cites. My having the casebooks open for her reference was completely unnecessary. The justices appeared transfixed as she spoke.

During our flight back to New York City, I said I was sure she would be nominated to the Supreme Court. She was -- 20 years later. Now, as a Supreme Court justice, she has said that she will stay on the court for at least five more years. I know Justice Ginsburg. She has told me that she will not retire as long as she has the ability to function. And function she does -- so very well.

Related: Ginsburg suggests she has at least five more years on the Supreme Court

She occupies a special role on the Court. She has become the leader of the "liberals" on the bench, the one who commands respect even from the more conservative members. (She introduced me to Justice Anthony Kennedy when he came to her chambers to escort her to the justices' conference. They were clearly friends).

Her tendency is to decide cases in a way that will encourage other justices to sign on to her opinions. And she seems to refrain from writing concurring opinions if she can join in with the others. She pointed out to me on one visit that she was happy to join with Kennedy in the Obergefell same-sex marriage case because he had included a discussion on equal protection.

But what makes her ascent so remarkable is how she did so against all odds. As the "RBG" documentary tells, Ginsburg attended Harvard Law School -- and got onto the Law Review both at Harvard and at Columbia from which she graduated -- in the 1950s. Women had been admitted to Harvard for the first time only six years earlier. They were not welcome. I graduated from the Harvard Law School 10 years later. Women were still not welcome. We constituted 6% of the class.

Throughout her career, she has been motivated by the conviction that denying one group of people equal rights affects members of all other groups. She encouraged the ACLU to take cases that highlighted gender discrimination against men, because they always affected women negatively, too. This was, in her words, a double-edged sword.

An example was the Wiesenfeld case, in 1975, in which the Supreme Court agreed with us that widowers should get the same Social Security benefits as widows. In that case, had it been the wife but not husband who died, her surviving spouse would have received full social security benefits.

In 2006, Ginsburg, writing for the Court, said that there has to be an "exceedingly persuasive" reason for any distinction based on gender to remain on the books. That is essentially the standard we sought in the Frontiero case those many years ago. Though we won on the merits and Sharron Frontiero got the benefits for her husband that she deserved, we lost by one vote the standard of review that would have guaranteed that "strict scrutiny" would be applied in all future sex discrimination cases.

Of course, Ginsburg cares about many other issues. She has dissented vociferously in the voting rights case, in the Hobby Lobby case, in Citizens United. In the marriage equality cases, as well as the challenge to the Defense of Marriage Act, she not only signed on to Kennedy's opinions, but during the hearing in the DOMA case, as I sat in the invited guest section, I heard her quietly mutter that the government, trying to maintain the status quo, was calling for "skim milk marriages."

Under DOMA, Ginsburg felt there were two marriages -- the full marriage, granted to heterosexual married couples, and the skim milk marriage, which is what Edie Windsor and her wife had to accept -- in which they did not enjoy full spousal benefits under the law.

It is hard for me to contemplate the Supreme Court without Ginsburg. It's not just her passion for equal protection but also her carefully crafted language that promotes clarity and eliminates confusion about the meaning of each decision she writes. And, of course, her seeking consensus whenever possible among her colleagues makes her a leader with whom other reasonable justices will want to agree.

I certainly hope that future appointees to the court will be worthy of that high office. I am hopeful that five years from now Justices Elana Kagan and Sonia Sotomayor will both be leaders in whatever gender discrimination cases remain to be decided and that future Supreme Court appointments will be made by presidents determined to protect the Constitution as society evolves.

Ginsburg has made -- and will continue to make -- an indispensable contribution to our democracy.